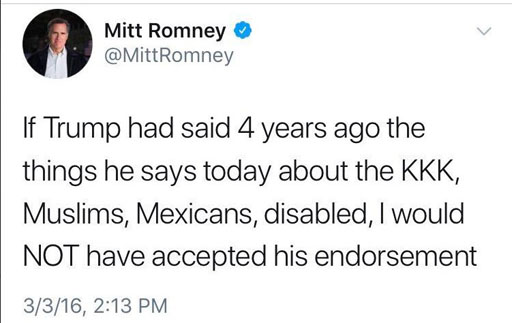 Well, what can you say about the on-again, off-again, on-again bromance between Donald Trump and Mitt Romney?

Trump labeled Romney a “choke artist” for his failure to win the 2012 presidential election.

Eventually, Trump won the 2016 election and Romney came crawling back in hopes of becoming Secretary of State.

But it turned out Trump was just punking Romney.

Now, as Romney announces his candidacy for the U.S. Senate seat currently held by retiring Orrin Hatch of Utah, Romney and the Trumpeter are buds once again.

Check out the tweets from last night from these crazy kids.

.@MittRomney has announced he is running for the Senate from the wonderful State of Utah. He will make a great Senator and worthy successor to @OrrinHatch, and has my full support and endorsement!

Thank you Mr. President for the support. I hope that over the course of the campaign I also earn the support and endorsement of the people of Utah.

And just for giggles, let’s take a trip on the way-back machine to March 2016 when Romney felt the need to give a huge speech wherein he called Trump “a fraud.”

Based on just their virtual love-fest Monday, you’d never know that President Trump and Mitt Romney have spent years at each other’s throats.

Here’s the evolution of their relationship, as told by their tweets: https://t.co/TUTEp0AJRR pic.twitter.com/SavSIQGivp

Mitt Romney said he wouldn’t accept an endorsement from Trump. Last night, he did. https://t.co/EAO0WjZauE

Why is Trump supporting Romney for Senate? Simple. He knows Romney is probably a lock to win whether he backs him or not, so he may as well take this opportunity to put Romney in his debt. Leverage.

Trump endorses Romney, who he once called “one of the dumbest and worst candidates in the history of Republican politics,” for U.S. Senate https://t.co/YsOhOVHvDB pic.twitter.com/xf1xvAY1XW