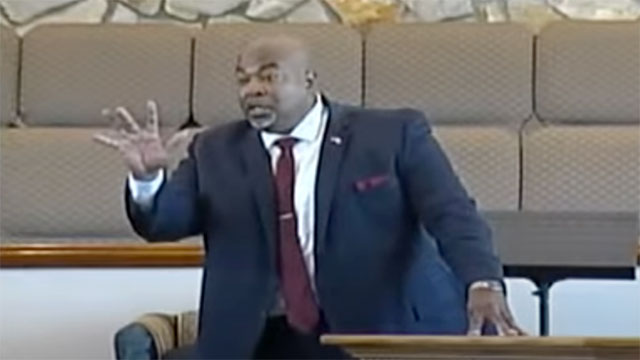 North Carolina Lt. Gov. Mark Robinson has made even more ugly remarks about LGBTQ+ people questioning the “purpose” of gay people comparing them to maggots and “what the cows leave behind.”

Robinson made the remarks Sunday, Nov. 14, at Berean Baptist Church in Winston-Salem. They’re the latest statements he has made against gay, lesbian and transgender people, leading some state Democrats to call for his resignation.

In Winston-Salem, Robinson compared being gay to “what the cows leave behind” as well as maggots and flies, who he said all serve a purpose in God’s creation. “If homosexuality is of God, what purpose does it serve? What does it make? What does it create? It creates nothing,” Robinson said.

“These people are superior because they can do something these people can’t do,” Robinson said, referencing having a child.

Read the full report here. You can watch the full hate-filled “sermon” below.

FYI, every time @markrobinsonNC has a new temper tantrum about how much he loathes gays, lesbians, teachers or whoever, he harms job growth and new business investment in North Carolina.

Literally his only job is to encourage investment in NC. And he’s doing the opposite. #ncpol https://t.co/hhckzHFnK9

“This man’s theology and religious practices are not only flawed and a perversion of the Christian tenets; he places countless people at risk of violent attacks and even murder every time he opens his mouth.” #ncpol https://t.co/Uw8jeiqx7A