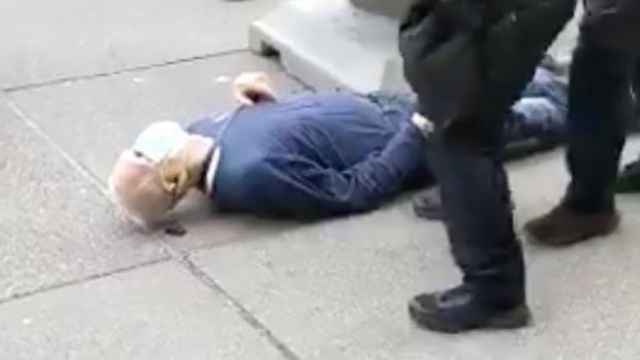 The two Buffalo police officers who shoved a 75-year-old man during a protest last June and left the man bleeding in the street will not face any repercussions for their actions.

“We as a society give police the authority to use force,” the District Attorney told reporters today. “The question comes down to if it crossed the line.”

A grand jury has declined to indict two Buffalo cops caught on camera shoving a 75-year-old protester during a June 2020 anti-police brutality protest and leaving him in a pool of blood, Erie County District Attorney John Flynn announced Thursday.

Aaron Torgalski, 39, and Robert McCabe, 32, were each charged with assault in the second degree, a Class D felony, for shoving Martin Gugino, a longtime peace activist in the upstate New York city, during the June 4 protest in the wake of George Floyd’s police killing.

A viral video showed Gugino falling down, blood pooling around his head after he hit the pavement. On June 30, Gugino was released from the hospital with a brain injury.

A grand jury has dismissed charges against Buffalo Police Officers Aaron Torgalski and Robert McCabe after they shoved Martin Gugino in Buffalo on June 4. pic.twitter.com/FOqBdoBh2b

Flynn: Mr. Gugino committed a crime and broke the curfew. He had no business confronting police officers. All that had to be done was turn him around and arrest him. I still stand by he should not have been shoved. He should have been arrested. That didn’t happen