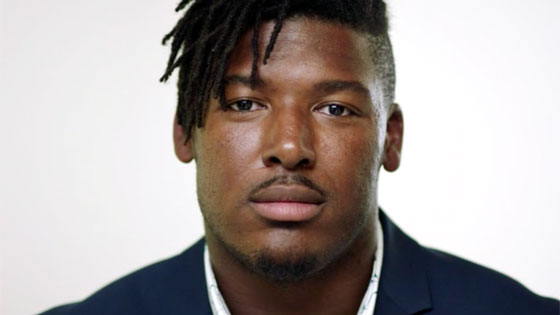 Ryan Russell, currently an NFL free agent, hopes to return to the game after missing all of last season with a shoulder injury.

But before he begins his journey to redemption, he had a little business to take care of.

In a first-person essay for ESPN, Russell has come out as bisexual, writing, “My truth is that I’m a talented football player, a damn good writer, a loving son, an overbearing brother, a caring friend, a loyal lover, and a bisexual man.”

“Today, I have two goals: returning to the NFL, and living my life openly,” penned the 6’5″ 267-pound defensive end. “I want to live my dream of playing the game I’ve worked my whole life to play, and being open about the person I’ve always been.”

Back in 2015, Russell was a fifth-round draft pick for the Dallas Cowboys. Alas, he only played in a single game for the Cowboys before being traded to the Tampa Bay Buccaneers for the 2016 and 2017 seasons. Having missed all of last year’s season, he’s now working to get back in the game.

More from his ESPN piece:

Growing up, I always felt as though my existence slipped between the cracks of two worlds.

I wasn’t flamboyant, tidy, or any other stereotypes kids are forced to construct their world around.

I wasn’t straight, hyper-masculine or aggressive; I cried quite a bit, and, as a young black man, I didn’t fit the bill.

Over time, I came to build two worlds. There was football, the drive to play at a professional level, a place that catered to my competitive instincts. Football was a world of opportunity where, if I performed well, I could earn a scholarship, support my family and build a life for myself long after I stopped playing.

Then there’s my personal world, which probably isn’t much different from most people who are figuring out who they are in adulthood.

I admire his honesty and authenticity. At this point, the question is, after the Michael Sam / NFL debacle of 2014, can an openly bisexual man return to the game?