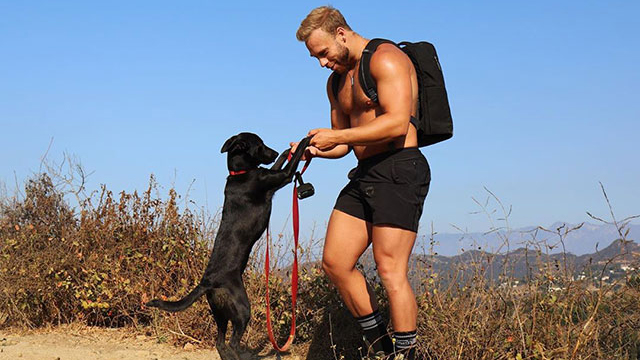 • InstaHunks: Brogan (above) shares some #BigDogEnergy from Los Angeles with his bestie Astrid.

• WeHo Times: Rage Nightclub, located in the heart of West Hollywood’s LGBT Rainbow District), has announced it will permanently close after 37 years. According to sources, the restaurant/bar and multi-level nightclub did not renew their lease which was up in November. Former employees also blame the COVID-19 pandemic and high rent as factors in its closure.

• Gay Star News: Gay reality TV personality Joe Exotic (of Tiger King fame) has written to Donald Trump begging for a presidential pardon to get him out of jail. In January a court sentenced him to 22 years in prison over his plot to kill his rival Carol Baskin and for killing five tigers in his zoo.

• Fox News: Former ‘pool boy’ Giancarlo Granda claims Jerry Falwell Jr. has been ‘relentlessly harassing’ him since the sex scandal broke that brought an end to Falwell’s tenure at Liberty University. Granda is now sharing text messages, emails and photos with that appear to back up his allegations and, at the very least, show the Falwells breaking Liberty’s code of conduct on multiple occasions.

• NY Daily News: New York Gov. Andrew Cuomo announced today indoor dining will be allowed to resume in New York City restaurants beginning September 30. Capacity will be limited to 25%, tables must be six feet apart, patrons will be required to have temperature checks, there will be no walk-up bar service, and customers will be required to leave contact information.

• Election 2020: Joe Biden called out Donald Trump for lying to the American people about knowing the true severity of the coronavirus health threat – “He knew how deadly it was,” said Biden. “It was much more deadly than the flu. He knew and purposely played it down. Worse, he lied to the American people. He knowingly and willingly lied about the threat it posed to the country for months. He had the information. He knew how dangerous it was. And while this deadly disease ripped through our nation, he failed to do his job on purpose! It was a life and death betrayal on the American people.”

Joe Biden accused President Trump of “a life-and-death betrayal of the American people” hours after journalist Bob Woodward revealed ahead of the publication of his new book, “Rage,” that Trump had concealed the true threat posed by coronavirus. https://t.co/UiDbqMI5bW pic.twitter.com/tpI6YCBeps