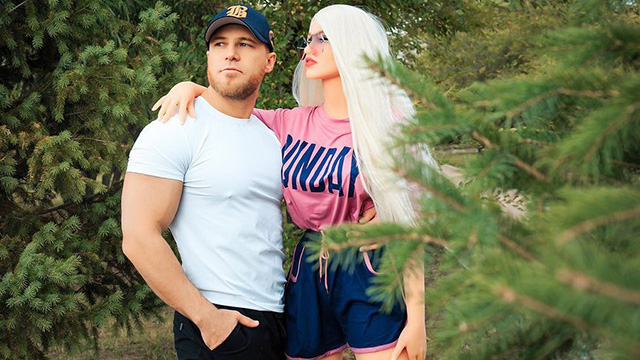 • New York Post: Proving that love is blind, and sometimes kooky, a bodybuilder from Kazakhstan (above) has tied the knot with his dearly beloved — a sex doll he dated for eight months before proposing a year ago.

• Milwaukee Journal Sentinel: Wisconsin’s elections board confirmed Joe Biden’s victory in the state Monday verifying Biden’s win of about 20,700 votes a day after the completion of a partial recount that found dozens of more votes for Biden.

• Media Matters: Conservative pundit Ben Shapiro complained on his daily webcast today that Hulu made the holiday romantic comedy, Happiest Season, featuring a lesbian couple. “Conservatives are going to have to get into the business of actually making entertainment because the left has decided that all entertainment is now to be ‘woke.’ All of it. Right?” No, Ben, there are dozens of holiday rom-coms made every year – only 4 this year are LGBTQ-themed. And that’s, like, a new record.

• Washington Post: Anthony S. Fauci and other experts urged Americans to take aggressive action as the December holidays loom to mitigate the surge overwhelming hospitals across the country. As the number of coronavirus-related deaths per day rose to its highest point since April, Fauci and others highlighted the importance of complying with mask mandates and physical distancing.

• NBC Out: Orange Is the New Black star and LGBTQ advocate Laverne Cox took to Instagram on Saturday to share that she and her friend were the victims of a transphobic attack that has left her “in shock.”