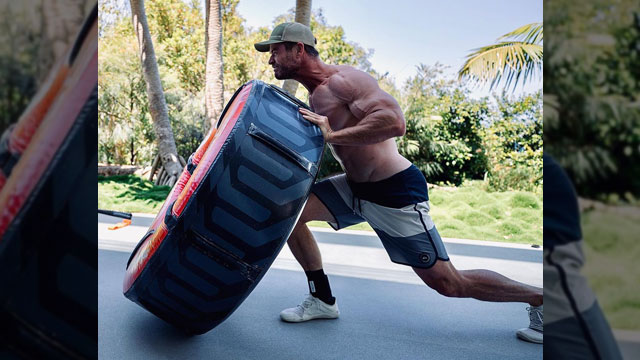 • InstaHunks: Avengers/Thor star Chris Hemsworth (above) helped himself to an ‘extra large donut’ prompting his Marvel co-star Chris Pratt to implore him to “stop working out” because Pratt’s trainer said, “Since we’re gonna be in the same movie and everything, he doesn’t want me to stand next to you if you look like that…” LOL

• Gay Star News: The Czech Republic’s new coronavirus rules allow ‘traditional’ weddings with up to 15 guests. However registered partnerships – which have been legal for same-sex couples since 2006 – can only go ahead if they are ‘urgent.’

• NY Times: Donald Trump’s campaign on Sunday disavowed Sidney Powell, one of his lawyers, after she made wild accusations of Republican governors being involved in a payoff scheme to manipulate voting machines. In an interview with NewsMax, she said, “Georgia’s probably going to be the first state I’m going to blow up.”

• CNN: A Nevada district judge on Friday denied a request brought by a conservative activist to halt the certification next week of the state’s election results that show President-elect Joe Biden leading in Nevada by more than 33,000 votes. The case was filed by conservative activist Sharron Angle and her organization, the Election Integrity Project, against Nevada’s Secretary of State Barbara Cegavske — the only Republican statewide officeholder.

• Fox5Vegas: Nevada Gov. Steve Sisolak implemented a “statewide pause” in order to help mitigation efforts against the spread of COVID-19, a move that will not shutdown the economy, but will tighten mask requirements and reduce capacity limits. New regulations include required masks for Nevadans “at all times” (indoor and outdoor) and 25% capacity for public gatherings.

• NY Post: Actor Ricky Schroder helped get Kenosha shooter Kyle Rittenhouse out of jail on a $2 million bond Friday in exchange for securing the rights to a movie about the teen shooter. Rittenhouse is charged with shooting and killing Anthony Huber, 26, and Joseph Rosenbaum, 36, and wounding a third man while with a militia group during protests of the police shooting of Jacob Blake.

BREAKING: I just spoke to the publicist for #RickySchroder who told me that the Actor/Director did assist in fundraising to help free Kyle Rittenhouse contingent on rights to his story (aka documentary)

2020: It's easier to imagine the end of the world than the end of capitalism pic.twitter.com/zxDkgFijUK