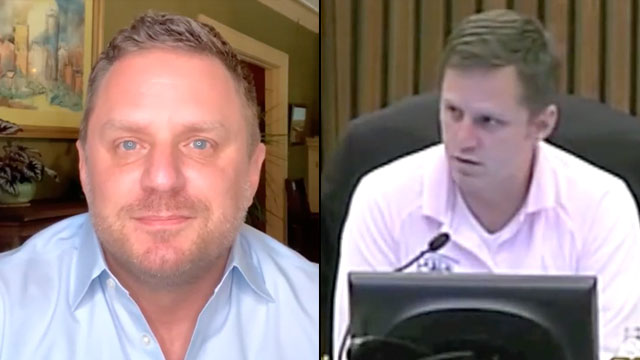 Taking part in the ’10 Years Better’ series from the It Gets Better Project, former Fort Worth City Councilman Joel Burns revisits the viral video of his city council meeting speech in October 2010 where he shared aspects of his young gay life and spoke out about LGBTQ bullying.

The new series features celebrities and everyday people who recorded It Gets Better videos early on, rewatching and reacting to their video. Host Emile Ennis Jr. speaks with guests about their life since — how it’s gotten better/evolved, and their message today for LGBTQ+ youth.

After video footage of his 2010 city council speech went viral, Burns found himself in the national spotlight regarding LGBTQ bullying and teen suicide.

Burns says he’s “still wowed that these few minutes have had this lasting impact some ten years later.”

As someone who grew up in Fort Worth, watching the speech – by the first man who had run for office as an openly gay man – had a powerful and very personal impact on me.

The morning of the city council meeting Burns read of 19-year-old Zach Harrington taking his own life in nearby Norman, Oklahoma, due to homophobic bullying.

Burns used his announcement time during that meeting to share some of his own coming out story (including being bullied in high school) and then segued to the growing epidemic of suicides by young LGBTQ people.

The 4-term city councilman’s prepared remarks originally included his own history with having had suicidal thoughts, but as he shares with Ennis Jr. in the video below, he stopped himself. “I realized, oh my god, my parents are probably watching this right now and I never told them I thought about committing suicide.”

While Burns was still in that council meeting, news outlets began reporting on his story.

Burns says he received over 20,000 emails regarding the speech and countless letters. One letter was addressed simply to ‘Joel Burns, Fort Worth. Inside was a note on a torn piece of paper.

“This is what remains of the letter I wrote for my roommate to find with my body,” remembers Burns. “I happened upon your speech and I decided to burn the rest of it.”

“It’s a reminder that there’s a lot of pain experienced by people all over the world. And they need reminders like the It Gets Better Project gives them that things will, indeed, get a lot better.”

The It Gets Better Project began as a viral social media movement in 2010 and has grown to an organization with global affiliates across 17 countries and 4 continents.

You can watch Burns’ powerful 2010 speech below.