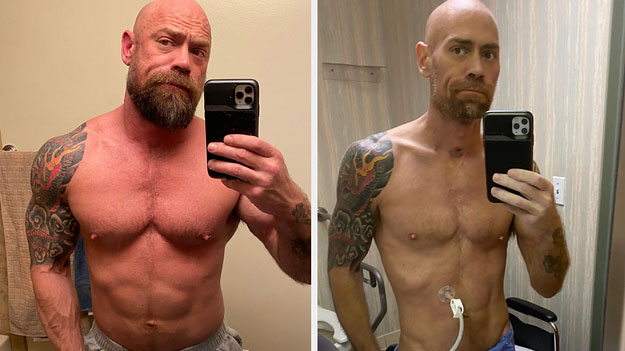 • Buzzfeed News: Mike Shultz (above), a gay nurse who attended the Winter Party Festival in Miami Beach, shared side-by-side before and after photos on Instagram to demonstrate how COVID-19 had affected his body in six weeks. “I wanted to show it can happen to anyone. It doesn’t matter if you’re young or old, have preexisting conditions or not. It can affect you.”

• Gay Star News: On March 3, three men shouting homophobic abuse at a 37-year-old in the heart of London pushed him into the street and attacked him. The police have arrested three men, all aged 21 years old, on suspicion of causing actual bodily harm.

• New Music: Superstar duo Lady Gaga and Ariana Grande dropped their new music video, “Rain On Me,” at midnight and it immediately shot to #1 in 26 countries on iTunes. “Rain On Me” is the second single from Lady Gaga’s highly anticipated sixth studio album Chromatica, which will be released on May 29.

• New York Times: The W Hotel in Barcelona, Spain, currently has just one occupant among its hundreds of luxury guest rooms. Maintenance engineer Daniel Ordoñez has lived alone in the hotel since March handling tasks that must be done on a regular basis like opening the 1,400 water taps every five days.

• Washington Post: A study of 96,000 hospitalized coronavirus patients on six continents found that those who received an antimalarial drug promoted by President Trump as a “game-changer” in the fight against the virus had a significantly higher risk of death compared with those who did not. People treated with hydroxychloroquine were also more likely to develop a type of irregular heart rhythm, or arrhythmia, that can lead to sudden cardiac death.

• Entertainment Weekly: I found this look back at the “mad, sad, totally fab life of Paul Lynde” by EW a great read. Click the play button below to relive some of the comedian’s funniest one-liners on the iconic game show, Hollywood Squares.