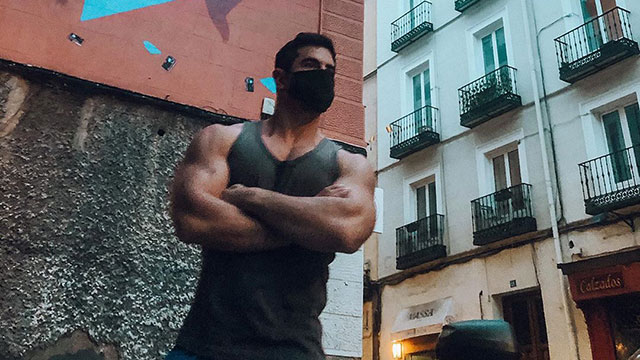 • InstaHunks: You’ve gotta love a guy not afraid to wear a face mask during this pandemic. Ignacio Pérez Rey (above) proves you can look good AND be safer. Follow him on Instagram here.

• Instinct: An openly gay New York state senator was rejected from donating blood even though he qualifies to do so under the new federal guidelines.

• LGBTQ Nation: Homophobic and transphobic rapper Boosie Badazz posted a video on social media admitting that he hired a sex worker to give oral sex to his son and nephews when they were 12- and 13-years-old. While some commenters cheered Badazz for his actions, others were horrified and said that someone should call Child Protective Services to remove the children from his care.

• PEOPLE: Beckett Cypher, the son of Melissa Etheridge and Julie Cypher, has died at age 21 of an opioid overdose. Etheridge and Cypher ended their relationship in 2000 but continued to co-parent their children. Musician David Crosby was later revealed to be Beckett’s biological father.

• Buzzfeed News: Twitter CEO Jack Dorsey emailed employees on Tuesday telling them that they’d be allowed to work from home permanently, even after the coronavirus pandemic lockdown passes. Some jobs that require physical presence, such as maintaining servers, will still require employees to come in.

• CNN: Donald Trump voiced frustration Wednesday at the nation’s top infectious disease specialist after he warned a day earlier against reopening schools and businesses too quickly. “I was surprised by his answer, actually,” Trump said when asked about Dr. Anthony Fauci’s warnings during televised congressional testimony that reopening states too quickly could have dire consequences. Trump added, “It’s not an acceptable answer.”

President Trump says he was “surprised” by Dr. Fauci’s warning about reopening schools during the pandemic and says it’s “not an acceptable answer” https://t.co/Nj065CIsxp pic.twitter.com/oX2LkydkPp