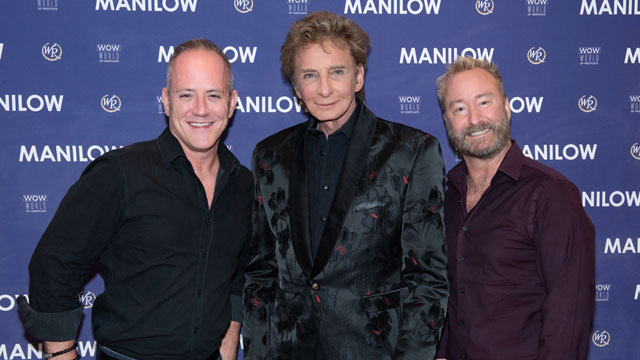 • Las Vegas: Hubby Michael and I were invited to an industry night at the Westgate Hotel here in Las Vegas where pop music legend Barry Manilow is still thrilling audiences. In a fast-paced 90 minute show, Barry belts out hit after hit, inspiring standing ovation after standing ovation. If you’re heading to Sin City, I highly recommend you check out this truly authentic star who continues to knock it out of the park.

• NY Times: A year after the “London Patient” was introduced to the world as only the second person to be cured of H.I.V., he is stepping out of the shadows to reveal his identity: He is Adam Castillejo. “This is a unique position to be in, a unique and very humbling position,” he said. “I want to be an ambassador of hope.”

• Spokesman-Review: Washington Gov. Jay Inslee has signed into law a bill that prohibits defendants from using a “panic defense” in court to justify violence against a member of the LGBTQ community. Washington is now the 10th state to ban so-called “gay panic” or “trans panic” defenses.

• Passing: Openly gay playwright Mart Crowley, author of the groundbreaking play The Boys in the Band, about a group of gay and bi friends in New York City, has died at age 84.

The play, a hit off-Broadway in 1968, went on to become a feature film directed by William Friedkin in 1970. Crowley finally received a Tony Award for his opus when an all-star cast brought the play to Broadway in 2018. Hollywood super-producer Ryan Murphy is now bringing that production to Netflix in the foreseeable future. RIP Mart Crowley.

RIP Mart Crowley, who wrote Boys In The Band. He was justly acclaimed, ignorantly attacked and finally given his due. He dissected and celebrated gay lives, and as a person, he was funny, generous and brave. He got there first, and the theater is in his debt pic.twitter.com/eQoJyjGPp2