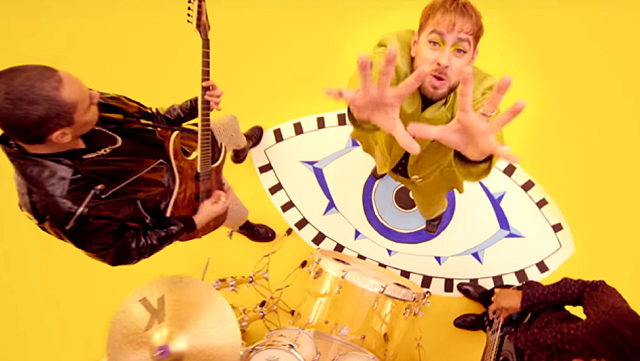 It’s currently raining here in Las Vegas, so the timing couldn’t be better to check out the banging new music video ‘Rain’ from metalcore/pop band Issues.

“I actually wrote the song ‘Rain’ years ago, and somehow, the demo rose from the dead and my bandmates really liked it,” says singer Tyler Carter. “We knew we had to do our Issues thang on it! I’m glad it’s gotten the amount of love it has because it’s such a relatable and catchy song. Due to all the fan love from the song, we felt that it deserved a video.”

While Issues definitely has its metalcore roots, the guitar-driven “Rain” blends in a bit of power pop that results in a deftly-layered track sure to please folks who like some punch to their pop.

Issues is flying high after the release of their critically-acclaimed album, Beautiful Oblivion, in October 2019. The collection garnered over 24 million streams as the band enjoyed a successful fall tour in support of the record.

Carter, who came out as bisexual in 2015, is one of the few LGBTQ voices in metalcore music today. And he’s not shy to speak up about inclusivity and tamping down toxic masculinity.

In an interview with Revolver last fall, he was asked about how he found his niche in the hypermasculine world of rock music.

Noting that “there’s a lot of toxic masculinity” in the rock community, Carter shared that he feels Issues “has always invited diversity” to their shows.

“There’s a lot of African Americans, Latin people, and then beyond that just like emos, jocks, military veterans, skaters,” he continued. “There’s always been such an array of different kinds of people at our shows, and it’s something we’ve always been passionate about letting people know, everyone is accepted and loved and we’ve noticed a lot more trans inclusivity at shows.”

He added, “It’s all about just letting people know they’re accepted here and we make sure we can try and stop any kind of toxic masculinity at our shows.”

And speaking of shows, Issues has announced a new concert tour with 30+ dates. For more info about Issues and the newly-announced concert dates, click over to the official website here.