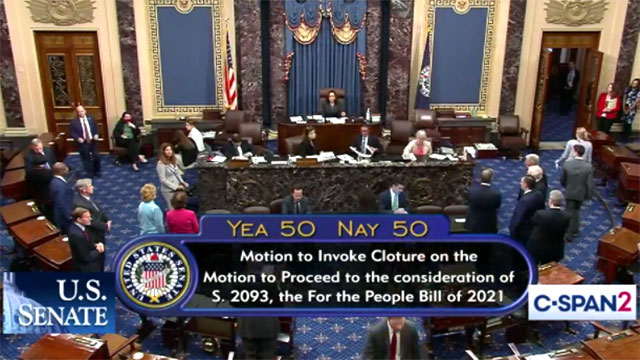 • New York Times: Senate Republicans on Tuesday blocked the most ambitious voting rights legislation to come before Congress in a generation, using the filibuster to deal a blow to a bid by President Biden and Democrats to counter a wave of state-level ballot restrictions.

• Washington Post: The Vatican has taken a highly unusual step against its neighbor, sending a diplomatic note to the Italian government that protests a draft law aimed at preventing hate and violence against LGBT people.

• Justice Department: James Dale Reed, age 42, of Frederick, Maryland, pleaded guilty today to threatening then-former Vice President Joe Biden and Senator Kamala Harris in October 2020. Reed left a letter on the doorstep of a Maryland resident which also stated, “…if you are a Biden/Harris supporter you will be targeted. We have a list of homes and addresses by your election signs. We are the ones with those scary guns. We are the ones your children have nightmares about…”

• The Advocate: The group behind Philadelphia’s LGBTQ+ Pride celebration has disbanded and canceled this year’s festivities due to a controversy. Philly Pride Presents had been criticized for a transphobic Facebook post that cast police as victims in the Stonewall riots.

#Pride in Philadelphia is in flux as the group behind the usual festivities disbanded following criticism from Black and Latinx organizers. https://t.co/XW5SUnL5Bf

• Out Music: Acclaimed singer-songwriter, producer, and DJ Planningtorock (aka Jam Rahouja Rostron) released their new single, “Gay Dreams Do Come True,” which is also the title track to their upcoming new EP of the same name.

About the euphoric new track, Planningtorock says, “This song is a dedication to my love, my wife Riinu and too the Black trans women who fought for the rights we have today as queer, gay, non binary lesbians.”