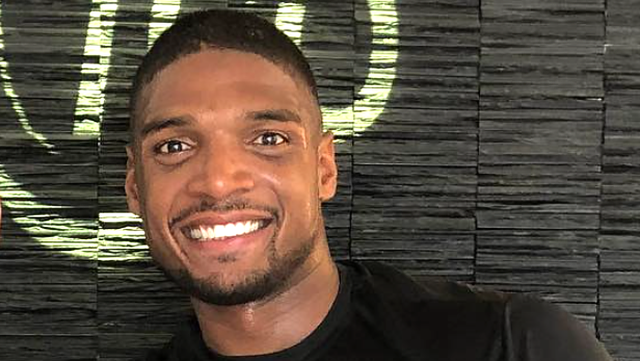 It’s been an exciting, uplifting time in the hours since Carl Nassib, defensive end for the Las Vegas Raiders, came out as gay in an Instagram post on Monday.

In a video message Nassib shared, “I just wanted to take a quick moment to say that I’m gay. I’ve been meaning to do this for a while now but finally feel comfortable enough to get it off my chest.”

The 6’7” five-year veteran of the NFL added that he knows “representation and visibility are so important.” He also announced a $100,000 donation to The Trevor Project.

In less than a day, Nassib’s Instagram account grew from around 27K followers to over 245K followers. Fun fact: the 28-year-old doesn’t follow anyone on the Gram of Insta.

But it’s hard to not think of Michael Sam in this heady time.

Sam, as many remember, famously came out as gay in advance of the 2104 NFL draft.

After a stellar season for the University of Missouri in 2013, he was a first-team All-American and named the Associated Press co-defensive player of the year in the Southeastern Conference. Teammates voted him Missouri’s most valuable player.

At that time, only one player who had earned that honor had been selected outside the top 33 picks at an NFL draft. When Sam came out the New York Times noted that he was “projected to be chosen in the early rounds of the N.F.L.”

But months later, Sam sweated through hours and hours of the draft until finally, in the 7th and final round, the St. Louis Rams made him their next to last pick. Sam was number 249 out of 256 at that NFL draft.

In the end, Sam was cut by the Rams before the regular season. He was picked up for the Dallas Cowboys practice squad but a month later he was released. He never made it to a 53-man roster in the NFL.

Conor Orr, for Sports Illustrated, writes, “Sam, essentially, gave up his dream of playing football to be the league and media’s crash test dummy, as everyone in football’s orbit pinballed through ways to have thoughtful and productive conversations about sexuality and acceptance in the locker room.”

In 2015, Sam was signed by the Montreal Alouettes and on August 7, 2015, he became the first out gay player to play in a CFL regular season game. He announced his retirement from football a week later due to mental health reasons. He currently shares his experiences as a motivational speaker.

Still a class act, early this morning Sam tweeted his congratulations to Nassib.

“Carl Nassib thank you for owning your truth and especially your donation to the @TrevorProject,” wrote Sam. “LBGTQ people are more likely to commit suicide than heterosexuals. I hope and pray people will take note to this. Thank you again Carl and look forward to seeing you play on the field.”

Carl Nassib thank you for owning your truth and especially your donation to the @TrevorProject. LBGTQ people are more likely to commit suicide than heterosexuals. I hope and pray people will take note to this. Thank you again Carl and look forward to seeing you play on the field.

Less than an hour later, Sam followed that with another message – this time to victims of bullying:

“To anyone young or old, black or white, straight or gay are being bullied by others please know this, I stand with you in your time of need and in your hour of triumph, I am your friend and your brother,” tweeted Sam. “Even though I may never see you, hug you, or even kiss you, I love you.”

To anyone young or old, black or white, straight or gay are being bullied by others please know this, I stand with you in your time of need and in your hour of triumph, I am your friend and your brother. Even though I may never see you, hug you, or even kiss you, I love you 💜

Some wonder if Nassib might experience some of what Sam saw during his short time in the NFL. But there are big differences between the two scenarios.

One, Nassib is already a veteran NFL player with five seasons under his belt. His team, coaches and front office already know him.

And, last year he signed a three-year $25 million contract with the Las Vegas Raiders. It’s hard to imagine Nassib’s value to the Raiders suddenly taking a dive.

Plus, we’re 7 years past Sam’s NFL experience. In that time, marriage equality has become the law of the land. And while LGBTQ equality isn’t quite there yet, we are making progress forward thanks in great part to that increased visibility Nassib mentioned in his coming out.

Folks in the Twitterverse did take some time to recognize Michael Sam and his journey as “the first.”

Shout out to Michael Sam. pic.twitter.com/4QYpcPGHEs

Tonight. Thinking about Michael Sam, his NFL life, and his coming out in 2013. 🏈🏳️‍🌈

We’re so happy to see that Carl Nassib is living in his truth! We also want to give a HUGE shout-out to Michael Sam for paving the way! https://t.co/9OHcQ1knSh

Having flashbacks to the insane news circus around Michael Sam coming out. And it seems like an entirely crazy, far away era. It was 2014.

Michael Sam was the first—he got chased out of the NFL.