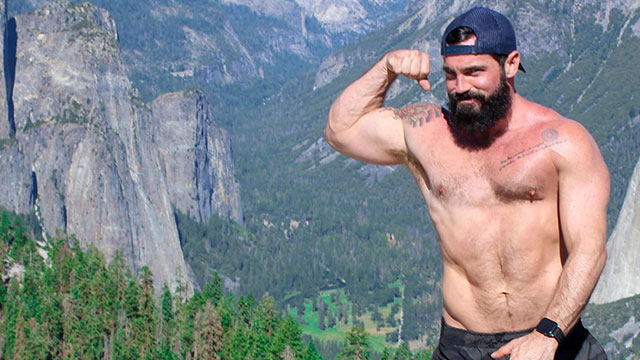 • InstaHunks: Woofy Joe Blizzard (above), signaling in from Yosemite National Park, calls this “being a nerd, as usual.” Nerd???

• GMA: Mary Trump, niece to President Trump, whose new book, Too Much and Never Enough: How My Family Created the World’s Most Dangerous Man, was just released, speaking to ABC News chief anchor George Stephanopoulos about her uncle: “He is utterly incapable of leading this country, and it’s dangerous to allow him to do so.” It’s worth noting that Ms. Trump is a trained clinical psychologist.

• Washington Blade: Facebook and Instagram have announced they will ban conversion therapy content/posts on their sites, following a block on paid ads promoting the practice earlier this year.

• Instinct Magazine: LA Pride has announced that it will be moving out of West Hollywood after almost five decades of celebration citing ongoing construction in West Hollywood Park as well as the changing demographics of Greater Los Angeles.

• VOTE: Eight of America’s leading fitness photographers have joined forces for “Flex Your Vote,” a new campaign that urges the LGBTQ community and its allies to the polls this November.

“It’s painfully clear why this is the most important time in our lifetimes to vote,” says Mike Ruiz, the campaign’s organizer. “We are being engulfed by a pandemic, millions are unemployed, the government is riddled with corruption. We need to change the direction of this country or we are headed towards a dictatorship where we will be stripped of our rights.”

Be like Eric and Flex Your Vote! 20% of LGBTQ+ people are NOT registered to vote! That 20% could help keep us protected for the next 4 years. Please vote like your life depends on it! WWW.VOTE.ORG @erictastic #flexyourvote #doordie #register #vote #MIKERUIZ