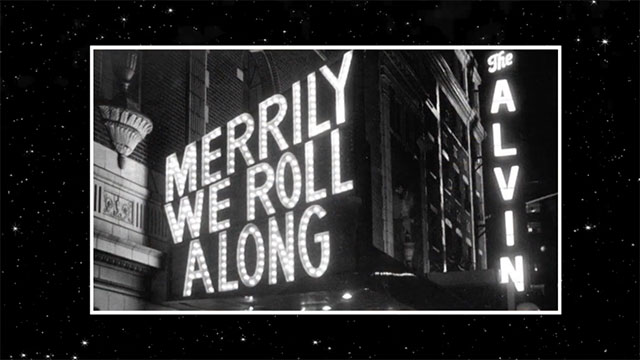 On Tuesday night, the theater world celebrated the 65th annual Obie Awards honoring the best of Off and Off-Off-Broadway in a most virtually virtuous night on the internet!

Viewers were treated to a special moment as members of the 1994 York Theatre Company revival of Stephen Sondheim’s Merrily We Roll Along joined members of the original Broadway and 2019 Fiasco Theater revival casts for a special performance of “Our Time” in celebration of the 25th Anniversary of the York production’s Obie Award wins.

Based on the 1934 play of the same name by George S. Kaufman and Moss Hart, the show chronicles the story of three friends from early adulthood to midlife – but in reverse.

The musical is about optimism, idealism, holding friends accountable and the fallout when those ideas collide as we journey through life.

As the show begins, we meet the three anti-heroes at difficult crossroads in their lives and their friendships. With each proceeding scene, the story is rewound ultimately arriving at their younger selves – lacking any cynicism and simply bursting with optimism about what lay ahead for them. But by then, we’ve seen the future.

“How did you get to be here? What was the moment?”

The original production opened (and closed) in 1981. I was a freshman musical theatre major at Syracuse University that fall, and even though we were hours away from New York City, the new show was very much on the minds of my fellow theater students as a recent graduate has scored the lead role of Franklin Shepard. A very, very big deal.

Unfortunately, in an almost ‘only in a musical’ twist, my fellow Syracuse alum was replaced before opening night.

While the reverse storytelling reportedly confused the audience – even though each scene’s year was projected on a screen for the audience – the score has been almost universally lauded as “brilliant.”

It’s been revisited in several high profile productions over the years in the hope that the show might be ‘fixed.’ The show finally hit its stride with the original London production in 2001 winning 3 Laurence Olivier Awards including Best Musical. In 2014, the show would repeat that success at the Olivier Awards winning Best Revival of a Musical.

The song “Our Time” is what we would call the 11 o’clock number or emotional apex of the show.

Set on the roof of an apartment house in New York City in 1957, young Frank and Charley are staring at the nighttime sky waiting for a glimpse of the first-ever earth-orbiting satellite, Sputnik. During the scene, Mary, their neighbor, arrives to view the satellite and meets the boys for the first time.

Suddenly, Sputnik is there in the sky, and in that moment, for the young friends, anything seems possible.

Check out the moving virtual reunion of three casts of Merrily We Roll Along singing “Our Time.”

While the show didn’t survive its original 1981 incarnation, many of the young actors in that cast were – like the show’s subjects – just beginning.

In 2016, original cast member Lonny Price (Charley) directed the acclaimed documentary, Best Worst Thing That Ever Could Have Happened,  reuniting many of the 1981 cast members to reflect and remember the impact the show and its idealism had on the actors. I wrote about the film here.