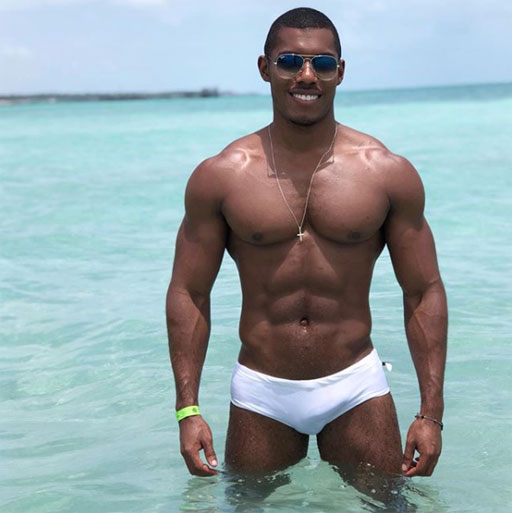 • InstaHunk Max Souza (above) is a study in gorgeous contrast between that gorgeous skin, the blue ocean and his whiter-than-white swimsuit. #Brazil

• Washingtonian: A bisexual man, frustrated he couldn’t donate blood, decided to donate a kidney in protest. Current FDA policy bans men who have sex with men from donating blood (but not organs) unless they are refrain from same-sex intimacy for a year.

• Sacramento Bee: California lawmakers have approved a bill that will require presidential candidates to provide five years of tax returns in order to appear on the primary ballot. Gov. Gavin Newsome, who provided six years of his own tax returns for his 2018 gubernatorial race, is expected to sign the bill into law.

• Washington Post: The U.S. House voted Friday to prevent Donald Trump from launching into war with Iran without first getting the approval of Congress. More than two dozen Republicans joined Democrats to include the provision, which includes an exception for cases of self-defense, in the House’s annual defense authorization bill.

• IndyStar: Gay high school teacher, fired for being in a same-sex marriage, sues Archdiocese of Indianapolis.

• TGIF: Groove into the weekend with Dinah Jane and her ‘tell-off’ video, “Heard It All Before.” The R&B diva recently brought her talent and sass to St. Louis PrideFest as well as the BET Awards Experience. DJ