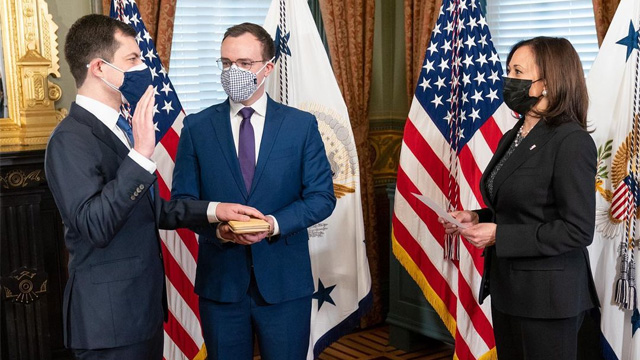 • Instagram: A day after his 86-13 confirmation vote in the Senate, Pete Buttigieg (above) was sworn in as Secretary of Transportation by Vice President Kamala Harris as husband Chasten Buttigieg held the bible.

• Outsports: Josh Leafer was a high school athlete who threw parties and chased girls. But it was all a cover. So he started a TikTok account, @closeted_fratguy, asking, “Anyone else like totally straight but secretly gay?” Over the last year, Leafer has heard from hundreds of other secretly gay guys who were wondering the same thing. Oh – and he came out 🙂

• Out Music: British indie-pop band Pale Waves has released a deeply personal video for their latest single “She’s My Religion,” which features frontwoman Heather Baron-Gracie and her life partner Kelsi Luck in a series of candid vignettes showing that even the most mundane moments can be transformative when paired with the right person.

“I wanted to give my fans a song to find themselves in,” Heather says of the intimate new video. “I wish I had a song like this when I was a young girl trying to find herself in the world.”

• Attitude Magazine: The new UK queer-centric drama series, It’s A Sin, has become one of Channel 4’s most successful shows ever since its launch last month. The series has already had 6.5 million views on All 4, making it the most-binged new series ever. Episode one has also become All 4’s most popular drama launch on record.

• Quinnipiac Polls: Two weeks into the presidency of Joe Biden, a majority of Americans say, 61 – 34 percent, that they are generally optimistic about the next four years with Biden as president.

• Politico: President Joe Biden traveled to the Capitol to pay tribute to Capitol Police officer Brian Sicknick shortly after the ceremony began Tuesday night, briefly placing his hand on the urn in the center of the Capitol Rotunda, saying a prayer and sadly shaking his head as he observed a memorial wreath nearby.