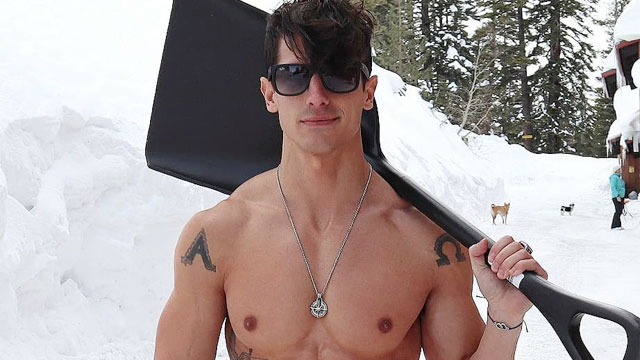 • InstaHunks: Hottie Tyler James has folks’ safety in mind when he asks, “Anyone need their driveway shoveled?” Is that a euphemism…?

• The Hill: The latest Iowa State University–Civiqs poll finds Mayor Pete Buttigieg currently leading the race in Iowa at 24 percent, followed by Sanders at 21 percent, Warren at 18 percent and former Vice President Joe Biden at 15 percent. No other candidate is polling above 4 percent in the survey.

• Buzzfeed News: High school students in Missouri responded to Pride flags being handed out by flying the Confederate flag. After the racist flag was removed, the school decided there would be no disciplinary action taken hoping instead to “teach our students to respect each other and to respect different viewpoints on a variety of social issues.” Note – LGBTQ pride is pride; the Confederate flag stands for a war fought to keep slavery.

• DListed: The highest-paid YouTuber is an eight-year-old named Ryan Kaji who has earned $26 million this year reviewing toys.

• NBC News: Until Wednesday afternoon, the fictional country from the popular 2018 Marvel superhero movie “Black Panther” was listed as a free trade agreement partner of the United States by the USDA’s tariff tracker.

• Des Moines Register: An Ames man was sentenced Wednesday to about 16 years in prison after he set fire to a church LGBTQ flag in June. Adolfo Martinez, 30, of Ames, last month was found guilty of a hate crime — a class “D” felony — third-degree harassment and reckless use of fire.

• NY Post: While Donald Trump was hunkered down in the White House monitoring impeachment proceedings Wednesday, his predecessor in the Oval Office was hitting the links in Hawaii. Barack Obama — a native of Honolulu — was photographed on the course at the Mid-Pacific Country Club in Lanikai, O’ahu, playing a round of golf under sunny skies and temperatures in the 70s.

@juliemason Obama golfing in Hawaii – living the best life. It looks like he’s been working out. Profiles in presidential golfing. pic.twitter.com/gM0e3fnCTx