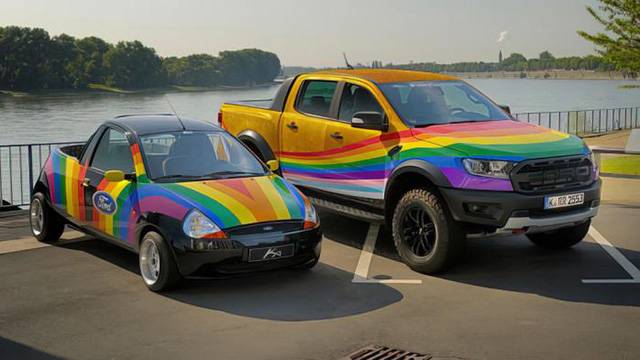 • Edge Media: In response to homophobic comments about the blue color of Ford’s Raptor vehicle being “very gay,” Ford’s German branch responded with a “Rainbow Raptor” (above).

• The Advocate: Fox News talking head Tucker Carlson got confused by the fact that Oregon’s openly bisexual Gov. Kate Brown is married to a man. Someone please explain what ‘bisexual’ means…

The concept of bisexuality proved to be too much for Tucker Carlson to wrap his head around. https://t.co/XkPi4oMVzX

• New York Times: Daily average for hospitalized Covid-19 patients in the US is now more than 100,000 over the last week. That’s higher than in any previous surge except last winter’s, before most Americans were eligible to get vaccinated. Florida and Texas lead in numbers of hospitalizations.

• Fox13News: Over 120 Tampa Bay area police officers and police department employees are currently out with COVID. Officer Michael Weiskopf passed away last week due to the virus. He was unvaccinated.

• Axios: The U.S. Department of Education announced investigations into five GOP-led states (Iowa, Oklahoma, South Carolina, Tennessee and Utah) that banned masks in schools. A key question is whether the laws discriminate against students with disabilities or underlying medical conditions.

NEW: The Education Department is investigating these 5 GOP-led states over their bans on mask mandates in schools, saying they could discriminate against students with disabilities: