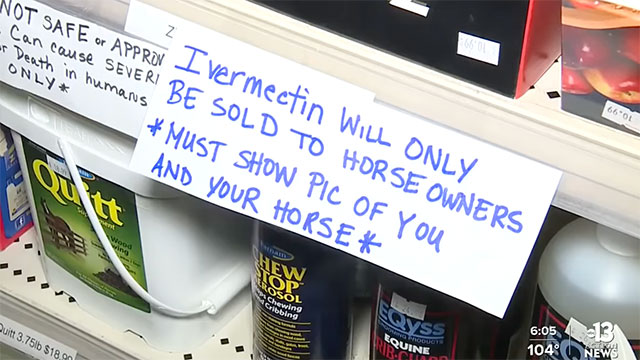 ABC13 in Las Vegas reports that Shelly Smith, a manager at ATV&V Tack and Feed, has begun requiring people to show a photo of themselves with their horse in order to buy an animal dewormer (Ivermectin) some folks are using in an attempt to treat COVID-19.

A #LasVegas pet store that normally stocks and sells #ivermectin for use on horses says they're completely sold out of the horse dewormer. A store associate tells @RossDiMattei she suspects a lot of her customers aren't using it as intended. FULL STORY: https://t.co/ngk6f4fbeQ pic.twitter.com/JiyRinUka1

“I had a gentleman come in, he was an older gentleman, he told me that his wife wanted him to be on the ivermectin plan,” Smith explained. “I immediately brought him over here, because at that time I had this sign hung up, and I told him this isn’t safe for you to take.”

“And he says, ‘well we’ve been taking it and my only side effect is I can’t see in the morning.’ That’s a big side effect, so you probably shouldn’t take it.” Which is why she hung a second sign now requiring customers to present a picture of their horse before buying ivermectin.

The FDA has not approved Ivermectin for treating COVID-19 in humans. As you can see in the video below, a veterinarian says it can have dangerous side effects when used improperly.