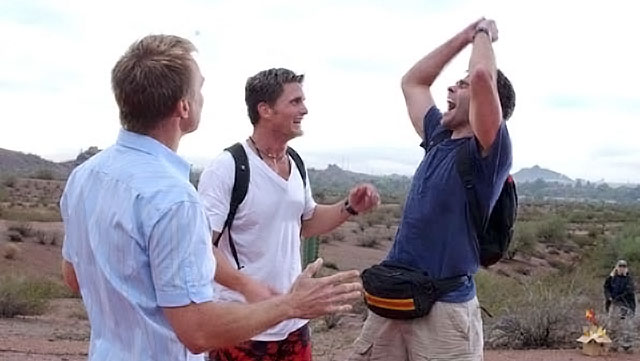 • Instinct Magazine: My colleague at my ‘other home’ has done a terrific round-up of LGBTQ reality show winners over the years including Amazing Race Season 4 champs Reichen and Chip (above). Hit the link for winning LGBTQ moments from Survivor, Big Brother and more.

• Global News: Shane Daum, 43, reports he was gay-bashed by a group of seven individuals while camping in British Columbia. During the incident, the men (who recognized him from his local grocery store) held his dog as they beat him unconscious. He was treated for a concussion, but law enforcement says they aren’t pressing charges because there are “no independent witnesses to identify any particular accused at the time.”

• Out Music: With his work in television, film and theater, Tituss Burgess is quickly emerging as one of the entertainment industry’s most versatile and dynamic performers. Burgess recently dropped his first single, “Dance M.F.,” aimed squarely at the dance music culture and this year’s many unstoppable virtual pride celebrations.

The track is a sultry sexy stomper with an attitude that is certain to bring comfort and escapism to our currently socially distanced souls. Burgess says the song “is a love letter to all the party people who in spite of the pandemic, are still committed to ‘live their best lives,’ party on down and celebrate Pride safely while in lockdown.”

• Variety: Facebook is unleashing hundreds of thousands of music videos in the U.S. starting this weekend — a direct challenge to YouTube, which has had a virtual lock on the internet music-video space for years. With the U.S. launch of music videos, which Facebook has been actively developing since at least last fall, the company has updated Artist Pages of musicians and singers with a new section to let users browse their official music videos.

• Yahoo News: Now that Donald Trump’s big GOP donor buddy Louis DeJoy has been installed as Postmaster General, orders are going out to employees reducing hours and services. I’m sure it’s all part of a plan to hobble voting by mail which Trump has been demonizing for weeks now for alleged ‘election fraud’ potential.

• The Hill: Some Republicans are urging GOP leaders to abandon the attacks on mail-in voting and to instead embrace it, warning that the president is effectively sabotaging his own party. The impact could be particularly pronounced in Florida, a battleground state where Republicans have traditionally outpaced Democrats among absentee voters. It’s also the preferred method of voting for many seniors, who broke for Trump in 2016.

• InstaHunks: I thought I’d share another shot of Backyard Envy host Garrett Magee since he made such a splash yesterday in my post about the upcoming Season 2 premiere on Tuesday, August 4.