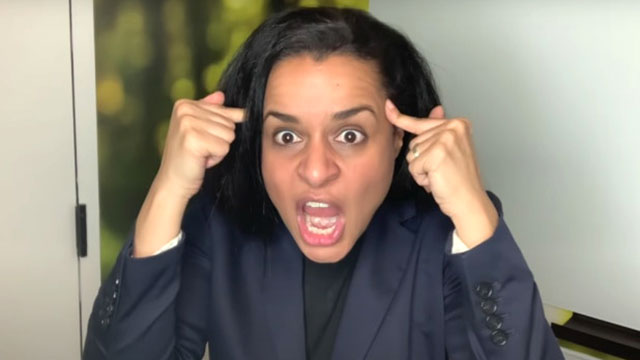 “As far as TikTok is concerned we’re banning them from the United States,” Trump told members of the press traveling with him. “I have that authority. I can do it with an executive order or that,” he said referring to emergency economic powers.

I’m not sure a president can ban a social media platform as it could fall under 1st Amendment Free Expression, but, hey…

Vanity Fair believes comedian Sarah Cooper’s rise to fame on the video platform could be the reason Trump’s ticked at the Tok.

Earlier this month, Secretary of State Mike Pompeo said the U.S. was looking at banning TikTok as well as other Chinese social media apps, citing national security concerns. Pompeo added that the Trump administration was evaluating TikTok as it has with other Chinese state-backed tech companies like Huawei and ZTE, which he has previously described as “Trojan horses for Chinese intelligence.”

But are national security concerns really behind Trump’s sudden pronouncement? Or is there another reason why the president wants to ban TikTok? Social media had their own answer: It’s all about Sarah Cooper.

Cooper, of course, is the actress and comedian who has come to Internet fame by posting videos of her lip-syncing Trump’s speeches and interviews to hilarious effect, whether it’s him denying he retreated to the White House bunker because of a threat posed by protestors, dodging a question about what his favorite Bible phrases are, or, most memorably, recreating his now-famous “People, woman, man, camera, TV” interview.

With more than half a million followers on TikTok, Cooper has been written up by The Hollywood Reporter, The Washington Post and The New York Times and appeared as a guest on The Tonight Show With Jimmy Fallon and The Ellen Show. (“You make me so happy,” Degeneres said). A profile in the Times of London was headlined: “How Sarah Cooper’s Trump Takedowns Made Her America’s New Comedy Hero.”

TRUMP: “We’re looking at TikTok, we may be banning TikTok.” pic.twitter.com/juVVaIyiGD

How to tick tack pic.twitter.com/1Mn8nk363f

The fact that he’s opposing that means that he wants the app gone, probably cause of Tulsa or Sarah Cooper.

As someone who respects our country’s teenagers, please lend us a hand in making sure Trump is not re-elected. You may not be able to vote but you can help influence those who can.

BREAKING: Trump says he's issuing an executive order to ban TikTok in the United States and we all know it's because Sarah Cooper made fun of him.