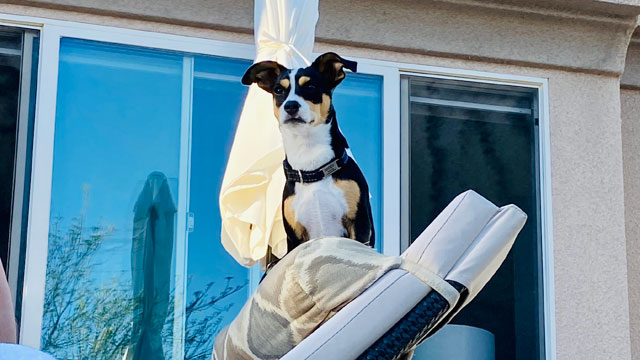 • Brody Watch: Just to let you know – we are soooooooo safe thanks to our fearless pup (above). Brody has no fear it seems other than not getting enough attention 🙂

• NBC News: Lawmakers in North Carolina have introduced a bill that would prevent doctors from providing gender confirming hormone treatment, puberty blockers or surgery for anyone under 21. Senate Bill 514 would also compel state employees to notify parents if their child displays “gender nonconformity” or expresses a desire to be treated in a way other than the gender they were assigned at birth.

• USA Today: First lady Jill Biden, the military mom in the White House, is working with Joining Forces which helps military and veteran families, caregivers and survivors get the support they need. After weeks of listening sessions with military families, Biden said her priorities will focus on employment and entrepreneurship, military child education and health and well-being.

• Daily Beacon: A Tennessee lawmaker has proposed a bill that would prohibit the use of any materials in schools that, in the language of the bill, “promote, normalize, support or address lesbian, gay, bi-sexual or transgender (LGBT) issues or lifestyles.” Opponents say erasing LGBTQ people from history books would send the message to queer kids that they arent’ “normal.”

• CNN: At least one of the Capitol riot defendants has flipped against the Proud Boys, agreeing to provide information that could allow the Justice Department to bring a more severe charge against the group’s leadership. The development is the first indication that people charged in the insurrection are cooperating against the pro-Trump extremist group.

• Instagram: Inaugural poet Amanda Gorman is the first-ever poet to grace the cover of Vogue Magazine – and when I say ‘grace’….I mean GRACE. #gorgeous