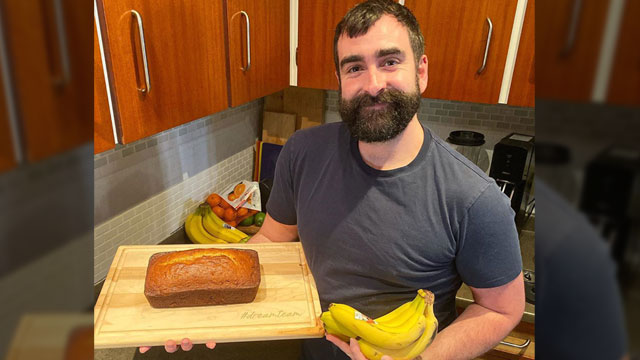 • InstaHunks: Who else is baking during this coronavirus thing? Toronto hottie Mike Yerxa (above – serious beard goals!!!) shows his pride in his newly-baked banana bread.

• The Hill: Twitter founder Jack Dorsey, whose net worth is estimated at $3.3 billion, announced Tuesday that he will donate $1 billion to the newly-founded Start Small Foundation to support “global COVID-19 relief” efforts. Dorsey ranks 168 on the Forbes 400 list, so there are 167 American billionaires with more money than him. Will they pony-up as well?

• MSNBC: Donald Trump thinks mail-in voting is “horrible,” but he voted by mail in Florida’s election last month. “Because I’m allowed to.” In 2016, there were nearly 33 million absentee votes counted, according to the U.S. Election Assistance Commission. More than 600,000 military and other overseas voters cast ballots in 2016.

President Trump: "I think mail-in voting is horrible, it's corrupt."

Reporter: "You voted by mail in Florida's election last month, didn't you?"

Reporter: "How do you reconcile with that?"

Trump: "Because I'm allowed to." pic.twitter.com/Es8ZNyB3O1

• Washington Blade: At a press conference last Friday, Donald Trump was asked about the FDA easing its outdated blood donation rules for gay and bisexual men from a 12-month wait to 3-months. The Donald, who frames himself as ‘good for the gays’ admitted he didn’t know anything or have anything to do with the new guidelines.

• Variety: Netflix is releasing an extra episode of the hit docu-series Tiger King next week, according to zoo owner Jeff Lowe from the show. “Netflix is adding one more episode,” said Lowe in a video posted on Twitter by Justin Turner of the Los Angeles Dodgers. “It will be on next week. They’re filming here tomorrow.” #ItsNotOver

• Talking Points Memo: Clad in gloves, a mask and full-length gown, Wisconsin Speaker Robin Vos (R) assured voters that it is “incredibly safe to go out” on Election Day despite the COVID-19 pandemic. Vos and his fellow Republicans were behind the push to keep Wisconsin’s elections as scheduled, in part, because there’s a state Supreme Court seat on the ballot and conservatives do better when fewer folks show up. Vos looks silly telling people “incredibly safe” wearing all his hospital gear…

This is real: Robin Vos, Spaker of Wisconsin State Assembly, on holding an election today: “You are incredibly safe to go out.” #NotOnionhttps://t.co/73KUQ4ocTu pic.twitter.com/ya5s1utE1N