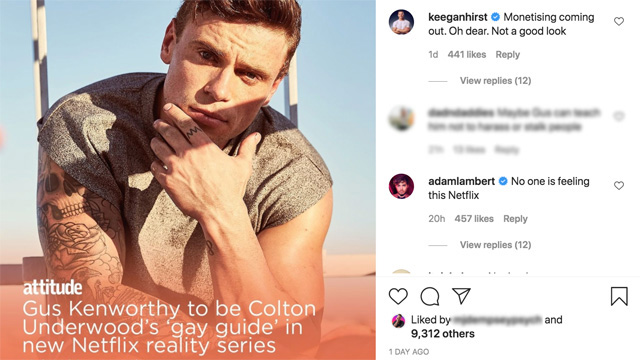 • Instagram: Not everyone is celebrating ‘Bachelor’ star Colton Underwood getting a Netflix series that will follow his new life as an openly gay man after coming out this week. When Attitude Magazine posted the news (above), pop star Adam Lambert chimed in, “No one is feeling this Netflix.” And out former rugby star Keegan Hirst wrote, “Monetising coming out. Oh dear. Not a good look.”

• Kenneth-in-the-212: Check out Kenneth’s weekly round-up of the what’s what in LGBTQ publications like this week’s GRAB Magazine featuring singer/songwriter Dodie.

• PBS: A new PBS NewsHour/NPR/Marist poll found two-thirds of Americans (66%) oppose laws that would limit transgender rights. That opposition includes majorities of every political ideology from liberal to conservative and every age group.

• CBC: A gym in Quebec City has become one of the largest recorded COVID-19 super-spreading events in Canada as 224 cases have been traced directly to the gym as well as another 356 related cases. The gym owner, a pandemic denier, shared social media posts that questioned the effectiveness of masks and minimized the dangers of COVID-19.

• Instinct Magazine: A straight man began sharing pics of his enormous penis on Twitter during the pandemic, and now says he identifies as bisexual following all the attention he garnered from gay followers. “I think if I met the right one, and got to know and like and trust him, I might find the courage to… explore.”

• NBC News: A new bill in the Texas Senate aims to redefine child abuse to include parents who consent to hormone therapy and puberty blockers for their transgender children. The legislation would make such acts a felony.

• Pink News: A student was caught on video tearing down a Pride flag that hung along a stairwell at Ridgeline High School in Cache County, Utah, on Tuesday. It had been placed by officials to celebrate the school’s Gay Straight Alliance during diversity week, alongside flags from various countries.

This is disgusting and heartbreaking. The amount of kids cheering when the Pride flag gets cut down is sickening. Embarrassing moment for Utahns and Ridgeline High School. Be better. 🏳️‍🌈🏳️‍⚧️ #ridgelinehighschool pic.twitter.com/zD1zrr7ZuD