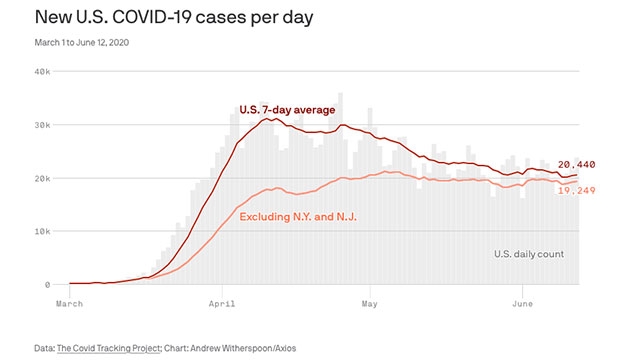 Looking at national data, it appears the number of new coronavirus diagnoses are dropping, but that’s primarily due to the improving situation in New York and New Jersey.

The two northeastern states were the hardest hit in April and May, and now that the situation there is definitely getting better, there’s a statistical illusion that the whole country is improving.

As Axios reports, if you factor out New York and New Jersey, the number of new cases is holding steady (or increasing in some states) – not going down.

Some states like Arizona, Texas, and Oregon have actually seen spikes in their communities.

The local ABC News affiliate KVUE in Austin, Texas, notes that Texas reported 2,504 new cases and 32 new deaths on Wednesday this week. For the third day in a row, the state also reported a record-high number of new hospitalizations at 2,153.

Only 16 states have seen steady declines in new cases over the past two weeks.