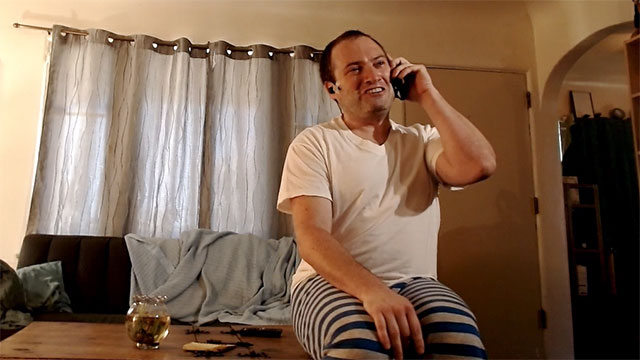 In this time of the COVID-19 pandemic, artists in the theater are finding new, unconventional ways to bring the vibrancy of live theater to audiences.

And of course, there’s Seth Rudetsky’s daily serving of theater fare with his Stars in the House web series.

The one-man show was written by Vanessa Stewart and Brendan Milburn, based on an idea by Amir Levi, who also stars in the musical. Daniel Henning, of the Blank Theatre, skillfully handles direction for the premiere which was all filmed in quarantine.

I had a chance to chat with Levi about the new musical, the experience of adapting the show for virtual audiences and more.

The Randy Report: What was the inspiration for the play?

Amir Levi: A few things! Thematically, the idea of obsession has always been fascinating to me. I think partly because we all have a little bit of obsessive tendencies in us. Some of us Facebook stalk our exes, some of us constantly re-read texts to make sure we said the right thing, or we look for deeper meaning within the texts that have been communicated or not communicated with a lover/ex-lover/potential lover, etc.

Most of us have the ability to stop ourselves, however. We have that little voice inside our heads telling us to stop because we’re being ‘crazy.’ This show is about someone who doesn’t have that ability.

Structurally, I’ve always loved telling stories through song. I had done a few solo concerts, and the order of the songs that I picked was always important, and there would always be something to talk about between numbers.

TRR: What moved you to release this during the pandemic?

AL: Our writer, Vanessa Stewart, e-mailed me, the director (Daniel Henning) and the composer (Brendan Milburn) about a week or two into the quarantine and said that since we don’t know how long this will last, and most of the show takes places in Nathan’s apartment, why not have this be our world premiere?

We don’t know when live theater will come back, and each of us is an artist that can’t sit still unless we’re working on a project (or several) at a time.

Just because the physical theatrical spaces are gone for now doesn’t mean theater needs to stop. Stories need to be told and people need to express themselves. Also, many people who are in quarantine (and even before quarantine) can probably relate to Nathan’s loneliness and desperation for companionship and love.

TRR: Do you feel you were able to capture the mood/point of the play via virtual release?

AL: Yes! Daniel is a brilliant director and came up with the different places to set the webcam to give it a more dynamic feel, and to really take advantage of this medium. We were originally planning on doing a live-stream of the whole show, but then we discovered that unless a musician was physically in the room with me, it would be impossible to really do the music justice.

Also, as a performer, it would be hard to stay ‘in it’ while constantly adjusting the camera and doing everything on my own. Through rehearsals, Daniel took note of what times of day the different lighting options were affecting my apt (Daniel directed me via Zoom screen share so he could see what my webcam was seeing).

Brendan and Vanessa wrote a new song (“Friend You”) for this medium that really helps show not only the emotional journey of Nathan but in this medium, is able to get a sort of intimacy that can only be conveyed through film.

AL: Eventually, when live theater comes back, it would be amazing to get a full run of it, and to perhaps tour it! I’m sure 1 or 2 new songs would probably be inspired for a fully staged version. However, since live performance probably won’t return till at least Spring 2021, we want to reach as many audience members as possible and hope this story moves them.

In addition to just overcoming the immense hurdles of creating a piece of theater via Zoom and the internet, the creative team and Levi deserve big props for telling the sometimes obsessive/sometimes touching story of one man’s desire to find love.

Favorite lyric: “Oh Chad, if you break it then you buy it / If you break my heart, you know you have to pay…”

Does Nathan end up with the virtual love of his life? I’m not giving anything away 🙂

You can watch the full one-act musical, Nathan C. Jones: A Love Story? below.