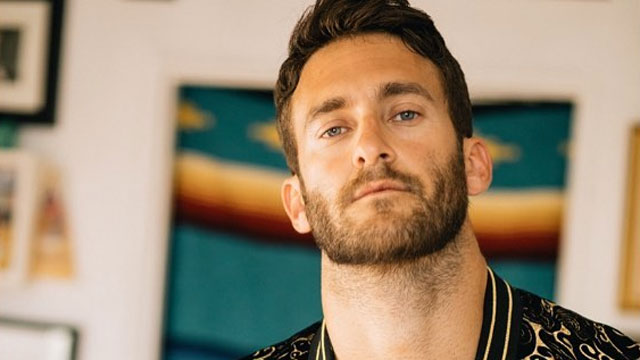 Roberts created the track and video while on the road with the National Broadway Tour of Miss Saigon, integrating different musical genres, changing up musical and visual textures.

Beautifully shot and directed by Anna-Lee Wright, the video takes the viewer on a rollercoaster ride of romance as Roberts’ vocals shift with equal ease from effortless, whispering falsetto to rich, robust musical muscle.

Roberts describes his songs as being, “Based in truth and experience.”

“‘Glue’ is about getting out of your own way, taking a risk and giving love a chance to bloom and flourish despite doubts or fears of the unknown,” says the artist. “Something I believe we can all relate to in some capacity.”

I recently spoke with the handsome artist about the new track and video.

The Randy Report: Congratulations on the debut single. Musically, “Glue” moves in and out of different tempos and sonic textures. What inspired the change-ups?

Adam Roberts: My favorite type of music that impacts me most is the kind that builds, is dynamic and that takes me on a ride. I wanted the mood of the song to musically fit the narrative journey of the text. For instance, I crafted the middle orchestral section paired with my vocals to be indicative of the ebb and flow of a relationship and to have a yearning quality to it, while the final chorus has more of a sprinting urgency to it.

TRR: With years of experience on stage in Broadway shows, did you find story-telling via the recording studio to require a different approach?

AR: Amazing question! I did actually. On stage, you’re playing to the back row. In a recording studio booth, it’s just you and a mic several inches from your face, which is much more intimate. I found that I allowed myself to let go of the physical and facial expressions and reroute the emotions into a more concentrated and zeroed-in manner, pouring it all into my voice. I was very strategic with how I played with a whispery softness versus a chesty belt or a chilly straight tone opposed to a ringing vibrato.

Feeling like 007 on James Bond Island! What a way to round out this trip. Thailand has been mind-boggling, eye-opening, restorative, and has taught me so much about my self! Can’t wait to return to this magical place! Kob!

TRR: What do you do outside of music that contributes to your creativity?

AR: I get my biggest kicks traveling the world because it broadens my horizons and helps me gain perspective. I never get so inspired as I do experiencing life outside of my comfort zone, in a new setting, surrounded by beauty in all its forms. If I’m not in a place financially to jet set, I take myself on a date wherever I am to have an adventure. Constantly shocking the system sparks new ideas and gets the juices flowing more-so than being sedimentary.

🐘 Disclaimer: Elephant Nature Park is an elephant rescue and rehabilitation center in Northern Thailand where you can volunteer and visit to help. Their mission is to protect and conserve elephants in a natural environment and to provide a healthy and fruitful life for them. 🐘

I’m constantly dreaming that I’m flying. Yesterday I got to make my dreams come true at 13,000 feet! #skydiving

AR: In a 1997 essay written by Mary Schmich she implores the reader to, “Do one thing every day that scares you.” I try to abide by her wise words daily, training myself to be more brave than I innately really am. I recently hiked a scary, haunted, ghost tower in Bangkok alone and I was petrified. On the way down, I fractured my foot and spent the rest of my vacation in a cast sprawled out. Initially, I was bummed, but then I made the most of my forced downtime, picked up my guitar, and ended up writing some of the best songs to date by the pool. Climb the ghost tower! LOL

Roberts made his Broadway debut in Spider-Man: Turn Off The Dark, which was followed by the critically-acclaimed Broadway revival of Pippin. Prior to his current gig in the national tour of Miss Saigon (where he covers the lead role of ‘Chris’), he traveled the country in the national company of Dirty Dancing.

He also recently served as co-director/co-choreographer for Broadway Backwards, the annual celebration where men sing songs originally written for women and vice versa. In doing so, gay and lesbian stories are told through the great songs of musical theatre and sung by our favorite Broadway performers.

Inside every man there is a beast, that protects a queen. 📷: @wadleywadley

Call me basic, but nothing beats a hike up Runyon. #la