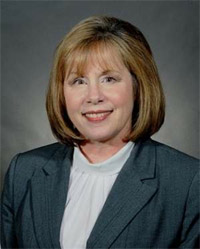 Janice Daniels, recently elected mayor of Troy, Michigan, is catching flack for a recently uncovered Facebook status update she wrote back in June after marriage equality was passed in New York.

On her Facebook page, Daniels’ wrote: “I think I am going to throw away my I Love New York carrying bag now that queers can get married there.”

Daniels confirmed today that she did post the message, though she said she decided against ditching the bag.  “I may have said something like that,” she said. “I probably shouldn’t have used that kind of language, but I do believe marriage should be between one man and one woman.”  Daniels added that while she’s opposed to gay marriage, and has moral issues with homosexuality, she doesn’t hate gay people. “I love all people. I am human. That was probably a poor choice of words.”

I have to ask: “probably a poor choice of words?” PROBABLY?  And I’m sure when she wrote the word ‘queers’ she meant it in the best way possible.

Gay rights leaders in Michigan said Daniels’ words amounted to hate speech. Denise Brogan-Kator, executive director of Equality Michigan, said on her own Facebook page: “I find it discouraging that a leader of people can have such disregard for the lives of people she serves.”
(via Towleroad)

UPDATE: Mayor Daniels was confronted before a City Council Meeting. Watch the video of her explanation. She says she used “one word” that people don’t like. “One word.”

I’d be curious to know if she had used the n-word in regards to African Americans would she expect to be ‘forgiven’ so quickly?

Also, note the strange smile she has while explaining herself. It strikes me as a bit odd. Why smile when this is clearly an issue of importance to your constituents?