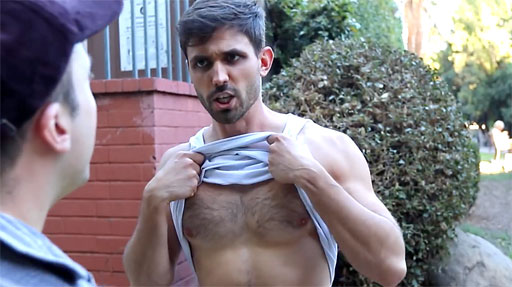 Comedian Michael Henry loves to hold up his magic mirror to the gay community to show us how ridiculous we can sometimes be.

In his new video short, “Wow, You Have a Beard,” Henry bumps into his buddy Daniel (played by Clint Keller) and is immediately aware that Daniel is somehow ‘different.’

Could it be the new wardrobe? (No.)

Perhaps it’s the peace Daniel’s found from meditating? (No.)

But it’s too late.

As Henry points out, “They’ve already found you – the gay bottom mafia!” Cut to a shot scanning the park with several gay men (“the hungry, hungry bottoms”) in beckoning positions.

“They can smell your exhuming testosterone now,” says Henry.

Even though Daniel doesn’t think he’s that “masc,” Henry quickly runs down the checklist: hairy chest, deep voice and an ability to curse like a sailor.

Worse yet, the ‘TopFinder’ app has found Daniel (“Top located – has beard!”).

Be that as it may, Daniel is flummoxed by his situation.

While Daniel is amazed a beard could hold so much virile power, Henry explains, “It’s your entire sexual persona now – you’re straight-passing.”

How could this be? Daniel is a proud bottom, a Bravo TV watcher, and a ballet instructor.

Finally, though, Daniel does find the one way to defuse his new macho status.

Hit the play button to find out how Daniel gets out of this hirsute headache.

Henry does raise a good question about how gay men label and identify based on choices like dress and grooming.

You can find more of my coverage of funnyman Michael Henry here.