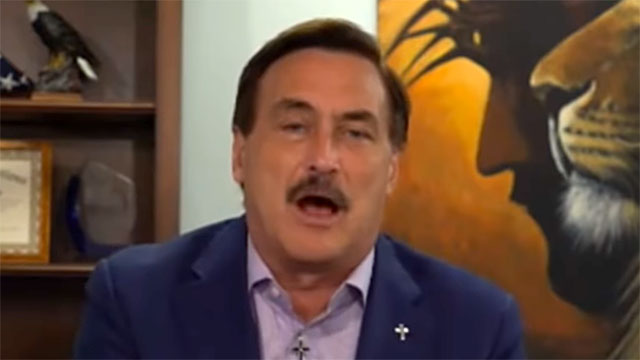 Trump supporter and My Pillow company owner, Mike Lindell, told viewers of Steve Bannon’s web show that once he reveals his “evidence” at his upcoming ‘Cyber Symposium’ that the 2020 election was stolen, President Biden and Vice President Harris will probably “resign.”

“Once we have this symposium, how are the pathways of Donald Trump coming back? The first one would be, once we have the symposium, by the night of the 12th or the morning of the 13th.

“If everyone has seen it – including the administration that’s in there now that didn’t win – maybe, you know, Biden and Harris would say, ‘Hey, we’re here to protect the country’ and resign.”

I’ve cued up the video to just before his claim that the current administration will resign. This man is wacky. Notice how he can’t seem to complete a single sentence.

Trump cultists have taken the ball and run with it saying Lindell’s statements mean ‘the former guy’ could be “reinstated” as president on August 13.

First of all – not happening.

Second, IF the president and vice president WERE to resign, the previous president doesn’t take over. The Constitution says the current Speaker of the House becomes president.

If they both resign, we get President Pelosi. Mike Lindell apparently slept through civics class.

In that case, let me be the first to welcome President Pelosi to the White House!

I swear to God this video isn’t doctored. It’s Mike Lindell, St. Hair Dye of The Pillow, expecting a return of Trump because he thinks Biden and Harris would resign – without realizing that the Speaker of the House would then become POTUS 🤦🏼‍♂️🤦🏼‍♂️🤦🏼‍♂️🤦🏼‍♂️🤦🏼‍♂️ pic.twitter.com/lAEBp94Vd0