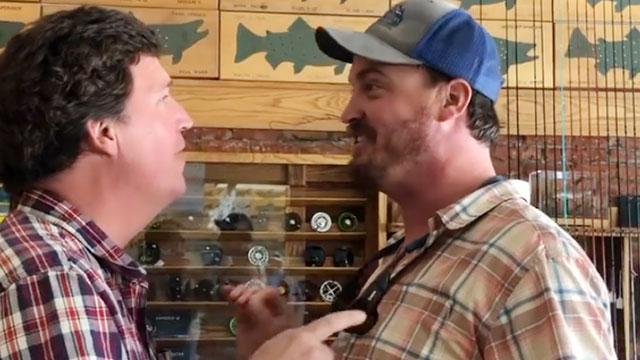 When I first heard about this little Tucker Carlson moment in a fly-fishing store in Montana, it seemed characterized as this big, angry, loud confrontation.

The man, Dan Bailey, posted a video of himself confronting the Fox News host at the store in Montana saying to him “you are the worst human being known to mankind. I want you to know that.”

Watching the clip now, the man is extremely calm and subdued. AND, it’s Tucker Carlson putting HIS hands on the man.

“Ambushing Tucker Carlson while he is in a store with his family is totally inexcusable,” Fox said in a statement to The Hill. “No public figure should be accosted regardless of their political persuasion or beliefs simply due to the intolerance of another point of view.”

Montana man to @TuckerCarlson: “You are the worst human being known to mankind. I want you to know that.”