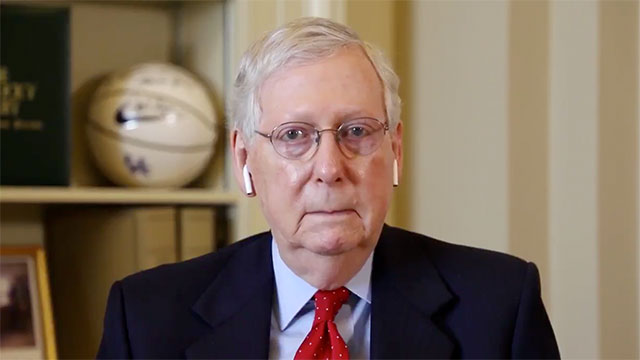 Senate Majority Leader Mitch McConnell announced there won’t be a vote for increasing stimulus checks to Americans to $2,000 because some might not need it. This was completely expected as McConnell has shown no interest in actually sending funds to Americans during the pandemic.

Mind you, he had no problem handing out tax cuts for the wealthiest worth far, far more.

Senator Mitch McConnell, the majority leader, said on Wednesday that the chamber would not consider the issue of larger stimulus checks separately from two other demands issued by President Trump: the investigation of election security and the removal of legal protections for social media platforms. The decision all but dooms the effort to increase direct payments to $2,000.

“Here’s the deal: The Senate is not going to split apart the three issues that President Trump linked together just because Democrats are afraid to address two of them,” Mr. McConnell, the Kentucky Republican, said.

A stand-alone bill to increase the payments, he said, has “no realistic path to quickly pass the Senate.”

All of a sudden Mitch McConnell and Senate Republicans are worried that someone in America might get a $2,000 check “who doesn’t need it.”

Funny. They had no problem giving a $1.4 billion tax break to Charles Koch and his family with a net worth of $113 billion. What hypocrisy!

“Let me just make it clear for the majority leader — that 10 out of the poorest 25 counties in the US are located in Kentucky.” pic.twitter.com/EPm7jT5TSF