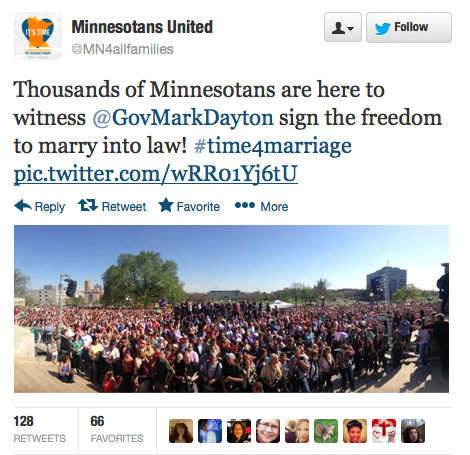 From the Star Tribune reports:

“By your political courage, you join that pantheon of exceptional leaders who did something extraordinary,” Dayton said. “You changed the course of history for our state and our nation.”

Dayton signed the marriage measure at a historic outdoor ceremony, a day after the Senate and House passed the proposal….Dayton acknowledged that a difficult step has been taken, but called it a crucial moment for equality.

“Progress has often been difficult, controversial and, initially, divisive,” Dayton said. “However, it has always been the next step ahead to fulfilling this country’s promise to every American.”

The ceremony kicked off a parade that took supporters to a massive downtown St. Paul celebration. The parade route in was lined with rainbow flags for the event.