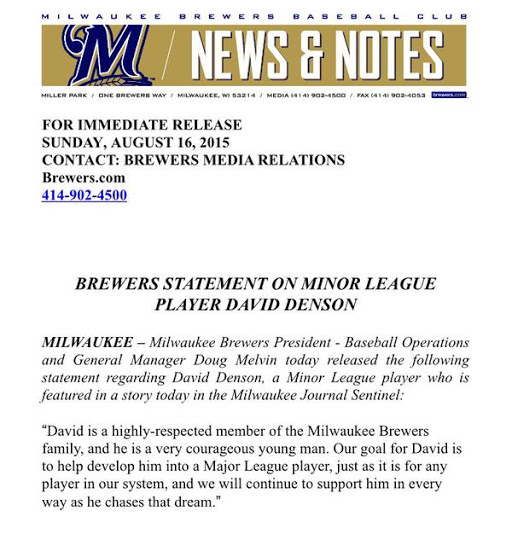 David Denson, first baseman for the Milwaukee Brewers’ minor league team in Helena, Montana, has come out to the Milwaukee Journal-Sentinel.

Benson explained that he actually came out to his teammates some weeks ago when one of his teammates jokingly called him a “fag,” and David answered:

“Be careful what you say. You never know.”

That led to a conversation that led to other players gathering around, and soon, Denson was out.

“Talking with my teammates, they gave me the confidence I needed, coming out to them.

“They said, ‘You’re still our teammate. You’re still our brother. We kind of had an idea, but your sexuality has nothing to do with your ability. You’re still a ballplayer at the end of the day. We don’t treat you any different. We’ve got your back.’

“That was a giant relief for me. I never wanted to feel like I was forcing it on them. It just happened. The outcome was amazing. It was nice to know my teammates see me for who I am, not my sexuality.”

The Milwaukee Brewers organization issued this statement of support: