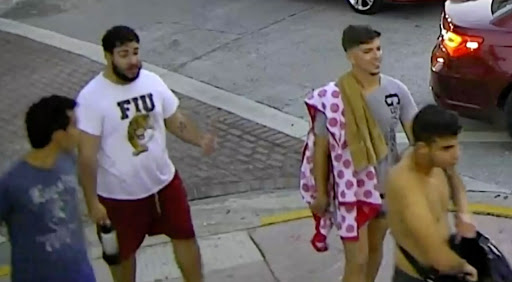 Two gay men were the victims of a violent hate crime on Sunday evening in Miami Beach following the city’s Pride Parade.

From The Miami Herald:

In video footage of the incident, four young men — one wearing a Florida International University T-shirt — are seen walking up to a bathroom area on Ocean Drive and Sixth Street at about 7:40 p.m. Sunday. Two other men walk out, and are immediately attacked by the four. One of the attackers shouts a Spanish slur used to refer to LGBT men before he and the other attackers begin repeatedly punching the two men.

When the two victims, who sustained multiple injuries to their faces, began to run away, the attackers chased them, Miami Beach police said.

One of the victims told NBC 6 News that he and his partner were holding hands when they were attacked.

“For me, the way we were dressed and everything and we were together, for me it was like, yes, it was a hate crime,” he said.

Police are asking for help to identify the men involved in the attack. Three are described as Hispanic white males, each about 5 foot 8, and between the ages of 19 and 24. Anyone with information should call Miami-Dade Crime Stoppers at 305-471-TIPS.

A bystander, 29-year-old Helmut Muller, tried to intervene and stop the attack but the attackers turned on him knocking him out cold. Muller woke up in a pool of his own blood and eventually spent six hours at the hospital getting staples in his head to stop the bleeding.

The attackers now face felony battery charges. As mentioned above, if anyone has any info that could lead to the arrest of the men, please call Miami-Dade Crime Stoppers at 305-471-TIPS.

You can see surveillance footage of the attack in the two local news reports below.