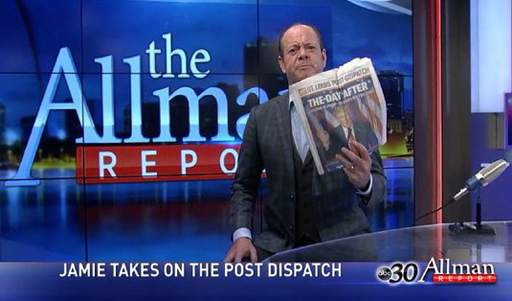 Conservative commentator Jamie Allman has resigned and his show at a Sinclair-owned station in St. Louis, The Allman Report, has been cancelled in the aftermath of his tweet threatening to “ram a hot poker up (Parkland high school shooting massacre survivor) David Hogg’s ass.”

Mind you – Allman’s tweet was a threat of sexual violence on a 17-year-old minor. 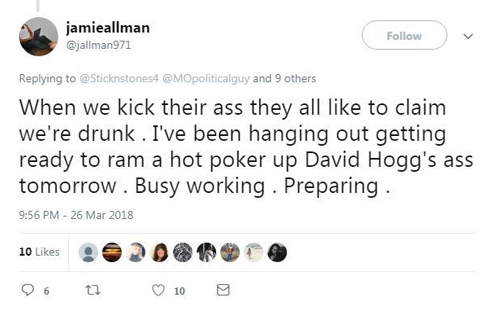 It’s not exactly clear what kicked off Allman’s unhinged anger towards a 17-year-old high school senior he’d presumably never met. But then, with some of the nuts on TV today, its hard to understand a lot of what gets said.

Of course, the real reason Allman is toast is he immediately began hemorrhaging advertisers.

Thanks for bringing this to our attention. Upon further investigation, our franchise partner has stopped its advertising. Thank you again for your concern.

Posted at 8:30am Friday:
We have immediately suspended all spending related to Jaime Allman indefinitely. We will not be deploying those dollars back into the station. We want to make a clear point, that this behavior is unacceptable.

This is a most unfortunate situation and what has taken place is contrary to PALM Health’s core values. We have contacted the radio station not only to voice our concern, but we have also stopped advertising on Jamie Allman’s show.

Jamie Allman made his account private. Guess he doesn’t like it when people take him to task for tweeting about sodomizing kids who survived school schoolings. Real titan of media right there.