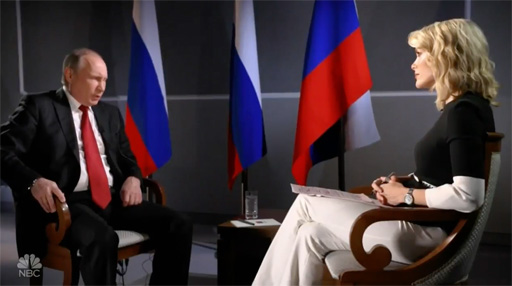 While I’m sure she got the ratings she wanted out of her debut on NBC last night, what Megyn Kelly didn’t get was anything of substance out of Russian President Vladimir Putin.

I’ll admit she did seem to ask the right questions, but got no where as Putin was very much in control of the interview throughout. She never seemed to have the right followup question ready, and Putin made sure to ridicule the ongoing investigation into Russian interference in the 2016 elections.

“For me, this is just amazing. You created a sensation out of nothing,” Putin said. “And out of this sensation, you turned it into a weapon of war against the current president. Well, this is, you know, you’re just, you people are so creative over there. Good job. Your lives must be boring.”

Additionally, there were no questions regarding the rounding up and torture of gay men in Chechnya.

Putin Destroys Megyn Kelly when asked about Russia interfering in the US election. pic.twitter.com/aGcpNhHaQK

That was Megyn Kelly’s interview with Putin!? She didn’t ask him anything really, zero follow ups. Didn’t even ask about about Chechnya.

Another cringe-worthy moment was when Kelly asked Indian Prime Minister Narendra Modi if he was on Twitter – he has over 30 million followers. She didn’t think to look that up?