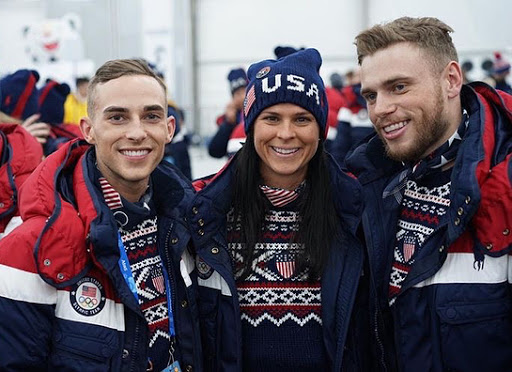 With the 2018 Winter Olympics underway, the folks at OutSports.com have compiled a list of the 14 out athletes taking part in the games at PyeoungChang.

Brittany Bowe (U.S., speedskating): Bowe is a former inline skater who has excelled on the ice, setting world records and winning medals. She competed in Sochi in 2014 but did not medal. An NBC Olympics profile noted that Bowe is dating Dutch speedskater Manon Kamminga. “It’s nice being with somebody that has the same passion, same drive, same goals,” Bowe said. “It’s obviously difficult living on different sides of the world. But we’re both focused on our goal.”

Gus Kenworthy (U.S., slopestyle free skiing): Easily the most publicized LGBT athlete of the Olympics, Kenworthy (a 2014 silver medalist) is a strong medal contender. He has gotten numerous endorsements and is one of NBC’s faces of the Games.

Adam Rippon (U.S., figure skating): The “old man” of the U.S. skating team at 28, Rippon jokes that he is proud of his “sons” Nathan Chen (18) and Vincent Zhou (17). Rippon came out in 2015 and proudly wears the banner of being the first publicly gay figure skater. His social media is acerbic and witty and must-follow.

These games mark the first time there will be openly gay men competing in the Winter Olympics.

According to OutSports, the number of out Olympians tops the seven from the 2014 Winter Games in Sochi. In contrast, there were 56 out Olympians at the much larger Summer Olympics in 2016.

Note: there well may be other LGBTQ athletes at the Olympics this season, but this list only includes those who have publicly acknowledged being out.