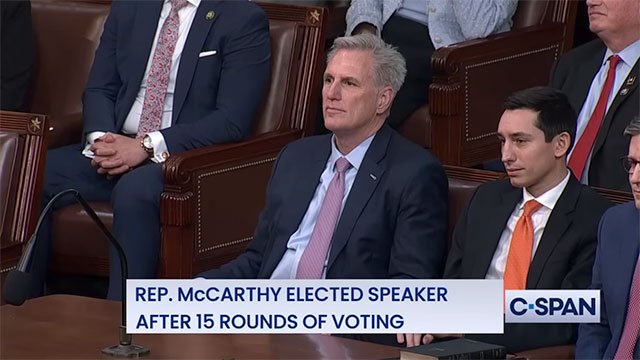 Republican Kevin McCarthy finally found himself on the winning end of a vote for Speaker of the House in the 15th round on  early Saturday morning.

He fell one vote short on the 14th ballot, and the chamber became raucous, unruly.

McCarthy strode to the back of the chamber to confront Republican Matt Gaetz, sitting with Lauren Boebert and other holdouts. Fingers were pointed, words exchanged and violence apparently just averted.

At one point, Republican Mike Rogers of Alabama, shouting, approached Gaetz before another Republican, Richard Hudson of North Carolina, physically pulled him back.  “Stay civil!” someone shouted.

This is the moment tensions bubbled over in US Congress

It took 15 rounds of voting before Republican Kevin McCarthy was elected Speaker – the most since 1860, in the build-up to the American Civil War

The remaining six holdouts eventually changed their votes to present.

Among the goodies McCarthy was forced to promise were:

• Investigations and subpoenas into President Joe Biden and the Democrats

• The reinstatement of a House rule that would allow a single lawmaker to make a motion to “vacate the chair,” essentially calling a vote to oust the speaker

• Expand the number of seats available on the House Rules Committee

• Mandate 72 hours for bills to be posted before votes

• And to attempt a constitutional amendment that would impose federal limits on the number of terms a person could serve in the House and Senate.

Former Speaker of the House Nancy Pelosi, who is still a member of the House, told the New York Times, “What we’re seeing is the incredibly shrinking speakership.”