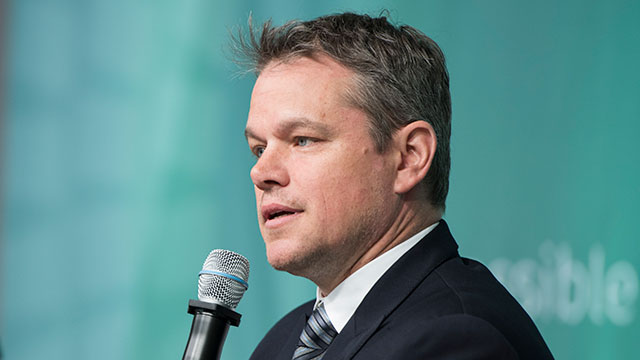 In a recent interview to promote his new film, Stillwater, Oscar winner Matt Damon shared that, up until a few months ago, he had still been using the homophobic slur “faggot.”

“The word that my daughter calls the ‘f-slur for a homosexual’ was commonly used when I was a kid, with a different application,” Damon told The Sunday Times. “I made a joke, months ago, and got a treatise from my daughter. She left the table. I said, ‘Come on, that’s a joke! I say it in the movie Stuck on You!’”

“She went to her room and wrote a very long, beautiful treatise on how that word is dangerous,” he continued.” I said, ‘I retire the f-slur!’ I understood.”

The Bourne action movie star was relating the personal anecdote to the ongoing evolution of language in the media which, he says, has taught him to “shut the fuck up more.”

Although, I’m not sure he shut up soon enough.

You may recall that in 2015 he urged gay actors to stay in the closet, because audiences should not know actors’ sexualities. That was after playing gay in Behind the Candelabra and The Talented Mr. Ripley.

To be honest, I don’t think Damon is an ‘enemy’ of the LGBTQ community. We’ve certainly got bigger things to worry about. But it’s a bit of a head-scratcher that in the year 2021 Damon wouldn’t know the word was an ugly slur. And, that it took a teenager to update his vocabulary.

Comedian Billy Eichner, like others on social media, was bemused but not amused:

Imagine this headline about any other derogatory ethnic/racial/religious etc slur being used in 2021. People would be up in arms and rightfully so. But you’re still allowed to be homophobic in this fake-woke industry. HAPPY PRIDE!!! 🌈🌈🌈🌈

I’ve lost some respect for Matt Damon for two reasons:

1. Being a 51-year-old Harvard-educated person who only realized using homophobic slurs was a bad thing *months* ago; and

2. Being foolish enough to think that was a cute story he should share with the world. pic.twitter.com/WtudX2fGtb

So Matt Damon just figured out "months ago", by way of a "treatise" from a child, that he's not supposed to say the word f*ggot.

As a member of the press, I like when celebrities talk to the press, but it's always illuminating to hear the stories that folks like Liam Neeson or Matt Damon think are humanizing and charming, but actually reveal insulation and isolation (among other unsavory stuff) instead. https://t.co/OZzDlyW72O