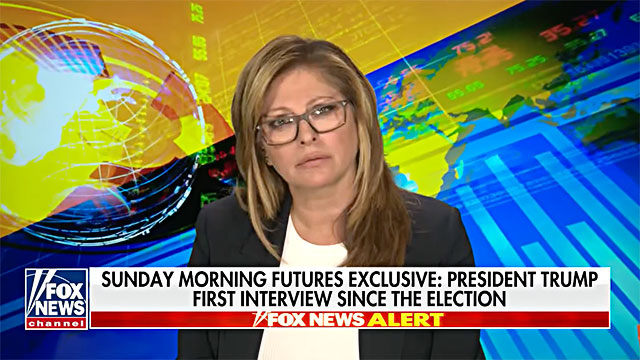 Fox News Channel host Maria Bartiromo began trending on Twitter this morning after allowing Donald Trump to call into her ‘Sunday Morning Futures’ program where he ranted on several baseless claims about the results of the 2020 presidential election without one fact check in sight.

As Trump threw blame left and right — at one point suggesting the FBI and Justice Department might be involved in a conspiracy to stop his reelection — Bartiromo sat silently with only an occasional tilt of her head to indicate any sense of journalistic curiosity.

The Donald complained about ‘massive dumps’ (poor choice of words considering #DiaperDon recently trended on Twitter) which we can only guess referred to the adding of mail-in ballots in some states that weren’t allowed (by law) to be counted until after the polls closed on Election Day.

#MassiveDumps soon began to trend on social media as well.

Trump also attacked Dominion Voting Systems saying the machines and software were defective. What he didn’t address, however, is that Dominion systems were used in 24 states during the 2020 election, including states Trump won like Louisiana, Iowa, Missouri, and Ohio. And yet, Trump hasn’t challenged the veracity of the voting there…

During one exchange, Bartiromo posited, “If you take out the swing states…” which makes no sense, obviously. We can’t just pretend Nevada, Georgia, Arizona, Pennsylvania, Wisconsin, and Michigan don’t exist.

“So this is no longer about you, President Trump. This is about America and many people agree with you,” Bartiromo actually said out loud.

“Look at the election you have coming up [in Georgia] right now. You’re using the same garbage machinery, Dominion” — Trump demoralizes Republicans by suggesting their votes don’t matter because the upcoming Senate runoffs in Georgia are rigged pic.twitter.com/aYM6KcGaos

“If you take out the oxygen atom, is it still water? If you take all the vodka out, is tomato juice still a bloody mary? If I take out 40 years, am I now a teenager? ”

Like many of her former CNBC colleagues like Larry Kudlow and Rick Santelli, Maria Bartiromo also lives in fantasy land. https://t.co/xYpug5uN5t

Donald Trump just went on television and blamed his election loss on “massive dumps.” This loser is the gift that keeps on giving. #massivedumps