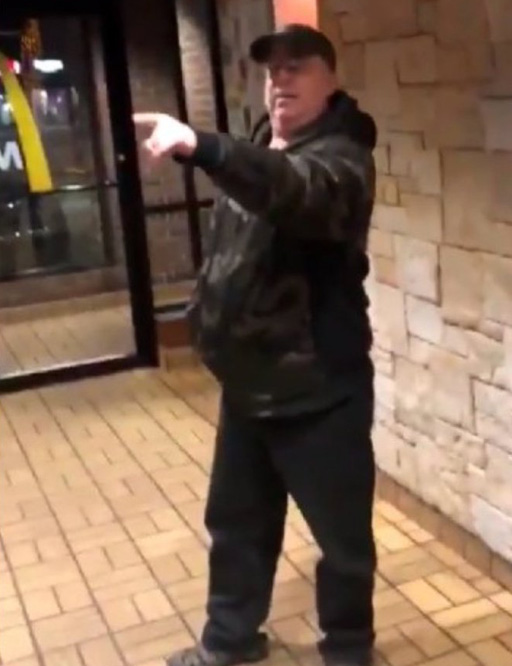 A white man, who grew impatient as four black girls were paying for their food at a Minnesota McDonalds, harassed the women to the point of pulling a gun on them.

To make things worse, the manager of the McDonalds attempted to throw the women out of the restaurant where the man was waiting for them.

Hey @McDonalds what are you doing??

A man harassed these girls & pulls a gun on them—and instead of calling the cops—you kick the girls out of your store?!😳

Are you *trying* to get them killed?

My jaw literally dropped upon watching that video.

According to the website MuslimGirl, the four girls (Farida Osman, Jihan Abdullahi, Amal Mohammed, and Zainab Hassan) had been studying a few blocks away but grew hungry.

Heading down to McDonalds, they ordered their food and wanted to try using their Apple Pay. They weren’t too familiar with the process and after some time gave up trying to use it.

“Jihan heard the man say, ‘You’re probably using EBT’, and she immediately turned to him and said “Just because I’m Black, doesn’t mean I use EBT.”

In Farida’s vivid recollection, this outrageously racist comment and the ensuing retort was immediately followed by the man “cussing them out,” and advancing aggressively towards the defenseless teens. He continued advancing, forcing Amal to call her friend Amin, who was seated in a booth nearby, for help, “because the man was so close she believed he was going to physically hurt her.”

“Amin and his friends came over and that’s when…the man pulls out the gun,” concluded Farida. The rest of the incident plays out in its entirety on video. The patron is seen aiming the gun at the teens as they scatter, while he swiftly backs out of the restaurant in a cowardly attempt to escape from the consequences of his obvious overreaction.

In the aftermath of this horrifying episode, the video depicts a McDonald’s employee screaming at the astonished teenagers, in an expletive-laced frenzy, insisting that they get out of her store. Equally incensed, another gentleman at the restaurant jumped to the aid of the teenagers in distress, vehemently protesting the idea that the victims of this heinous attack should be thrown out into the streets, along with the gun-toting lunatic.

The staff of the McDonalds was reportedly hesitant to call the police, but eventually did after extreme pressure from the frightened young women.

Paul Ostergaard, owner of the franchise in question, responded to MuslimGirl about the incident:

“Nothing is more important than the safety and security of our customers and employees. We take this matter seriously and are working with local law enforcement while we investigate the situation.”