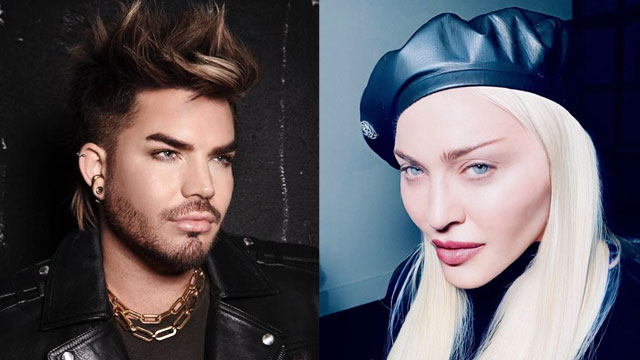 Following Lil Nas X’s fierce performance at the BET Awards this past Sunday, which culminated in a steamy kiss with one of his male dancers, folks on social media were quick to point out it wasn’t the first same-sex kiss to stir the award show airwaves.

Notably, there was Adam Lambert’s male-male kiss at the 2009 American Music Awards, and Madonna’s smooch with Britney Spears at the 2003 MTV VMAs.

Speaking to Billboard this week, Lambert gushed over the moment saying it was “hot.”

“I think he is definitely like the gay pop star that is 2021 — he’s bold, he’s controversial, he’s pushing boundaries,” Lambert told Billboard. “That’s what we want our pop stars to do. It’s just taken this long to have it be a gay one.”

That said, the 39-year-old singer acknowledged the public responses to his kiss versus Lil Nas X were quite different.

Lambert says he was flying to New York City the next day to perform on Good Morning America but was canceled due to the controversy.

Pointing to streams, sales and radio chart position today, Lambert admits, “One of the great things about Lil Nas is when you look at ‘Old Town Road,’ you see that this massive worldwide hit helped give him some freedom to make some statements and to make some real art. Timing is everything.”

“There is so much good will for someone like him,” Lambert adds. “And I’m just happy to be able to have the perspective to appreciate it.” 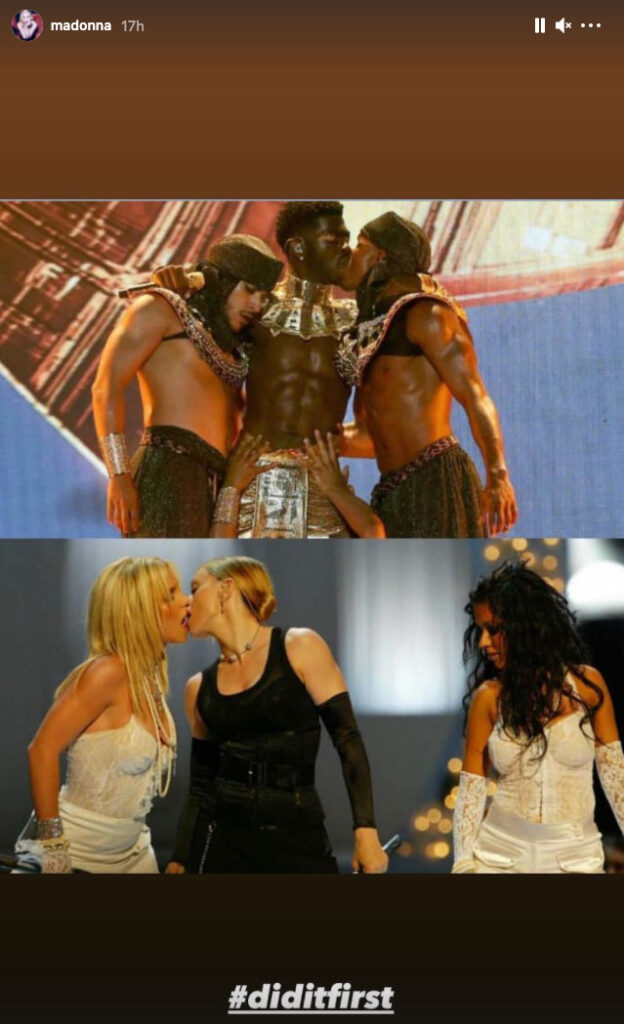 Madonna responded to comparisons in her own inimitable way by posting a pic of her VMAs kiss next to Lil Nas X’s BET smooch in her Instagram stories with the hashtag, “#diditfirst.”

When the screen capture was shared on Twitter, folks got a bit riled up.

Some thought the Queen of Pop’s remark took away from Lil Nas X’s moment:

Not mad at the mirrored images themselves, but I guess it'd never occur to her or her team to have some grace and go for a "love to see the next generations living out loud" or something, since he is a gay man kissing a man vs. her w/a younger pop star in a bid to stay relevant https://t.co/Wmc9hyaMum

Not Madonna thinking she did something with this comment… you had your moment let a queer black man have his moment!!! https://t.co/QTahm8JQPa

madonna running to make every queer celebrity's moment about herself https://t.co/R6MxwkmFjC pic.twitter.com/mBndTfKlkp

Others thought Madonna could have used the moment to speak up for Britney Spears’ ongoing legal issues:

Madonna dragging Britney into stuff to get dragged but she can’t say #FreeBritney? pic.twitter.com/xUucAxH1W4

For his part, Lil Nas X wasn’t buying into the turmoil. He tried to cool things down on by defending Madge’s comment as a joke and reminding folks the two are friends.

At the end of the day, if Madonna wanted to make a statement – and we know she’s not shy about that – I doubt she would have hidden the remark in a ‘blink and it’s gone’ Instagram Story.

I thought we been knew y’all were friends pic.twitter.com/YSTwpN7sCz