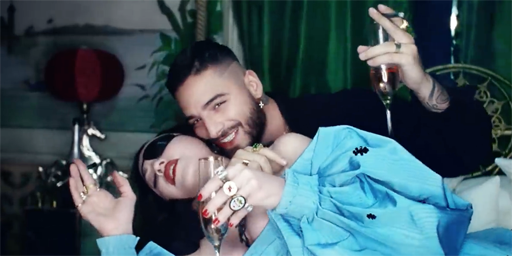 The video, from her upcoming album Madame X, begins with a long shot of the pop queen praying in the distance:

“Dear God, how could I trust anyone after years of disappointment and betrayal?” she whispers. “How could I not want to run away again and again? Escape. I will never be what society expects me to be.” #ClassicMadonna

“Now, I’m Madame X, and Madame X loves to dance,” she concludes her prayer. “Because you can’t hit a moving target.”

Cut to Madge leading a dance class in her eye-patch wearing persona of Madame X, where she meets Maluma.

At this point, it’s important to repeat that Maluma is uber-charming and smoking hot.

The dance lesson leads to some mattress dancing (which may or may not involve toe licking), and eventually a wild, raucous carnival wedding party.

In between, Madge dances opposite a horse in a darkened arena, which may or may not have a clearer meaning at another time…?

Did I mention that Maluma is way hot? But despite rumors that he might be gay, the Latin pop-star has laughed at those allegations.

The duo will perform “Medellín” live at the 2019 Billboard Awards on May 1.

And this isn’t the only collaboration with Maluma. He’s also featured on another Madame X track, “Bitch I’m Loca.”