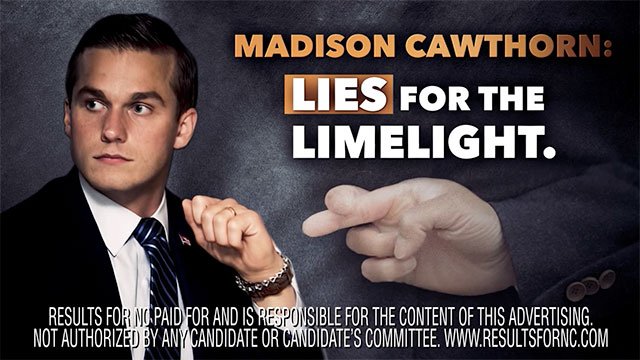 The video ad, titled “Madison Cawthorn’s Lies,” was uploaded to Youtube on Thursday by Results for NC, a Super PAC tied to Tillis. The ad will also air on cable.

The video knocks Cawthorn as an “attention-seeking embarrassment” to the Republican Party. The PAC’s ad knocking Cawthorn, 26, comes as the freshman lawmaker faces several primary challengers who view him as vulnerable.

Among his many lies he’s told in just the past couple of years: training for the Paralympics, being a real estate entrepreneur, working full time for Mark Meadows, that his best friend left him to die in the car accident when he saved his life, that he was going to attend the Naval Academy on a football scholarship, and much more.

The 26-year-old has also called Ukrainian President Zelenskyy a “thug” and threatened to “run over” liberals.

"In perpetual pursuit of celebrity, Cawthorn will lie about anything," it declares https://t.co/W4995HUeLt

Thank you to @ThomTillis’s super PAC for spending over $300,000 to run an anti-Cawthorn ad locally. The ad doesn’t mention any other candidate, so will likely help everyone else as well: @ChuckEdwards4NC @WendyforWNC, @CuttForCongress, & @Bruce_OConnell https://t.co/y3tGXVi1SB

And this is Cawthorn’s Democratic opponent:

Democrat @JBeachFerrara who is running against Madison Cawthorn is now up on TV in the district with this ad. pic.twitter.com/OW9RLGTclw