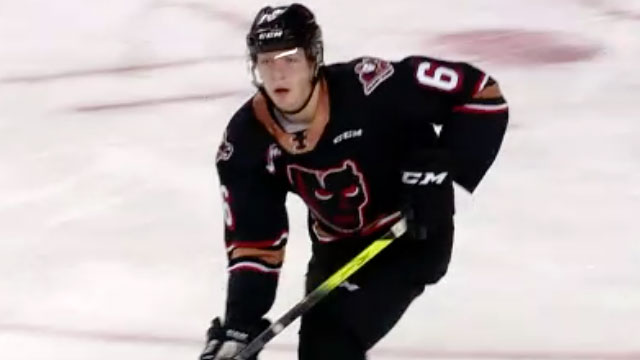 Luke Prokop, a prospect for the Nashville Predators, came out as gay on Monday becoming the first active player under a National Hockey League contract to do so.

“I am no longer scared to hide who I am,” the 19-year-old wrote on Instagram. “Today I am proud to publicly tell everyone that I am gay.”

“It has been quite the journey to get to this point in my life, but I could not be happier with my decision to come out,” Prokop continued. “From a young age I have dreamed of being an NHL player, and believe that living my authentic life will allow me to bring my whole self to the rink and improve my chances of fulfilling my dreams.”

The six-foot-four defenseman went on to say that while he is “new to the community,” he is “eager to learn about the strong and resilient people who came before me and paved the way so I could be more comfortable today.”

Prior to Prokop, there has never been an NHL player, active or retired, who has publicly come out.

Originally from Alberta, Canada, Prokop played for the Calgary Hitmen of the Western Hockey League last season, acting as an alternate captain.

He was selected by the Predators in the third round of the 2020 NHL draft. In December, he signed a three-year contract with the team.

Prokop told ESPN that personal struggles during his tenure with the Hitmen led him to the realization he needed to come out.

“I was lying in bed one night, had just deleted a dating app for the fourth or fifth time, and I was extremely frustrated because I couldn’t be my true authentic self,” Prokop said. “In that moment I said, ‘Enough is enough. I’m accepting who I am. I want to live the way I want to, and I want to accept myself as a gay man.’”

Prokop told @emilymkaplan that he wanted to come out publicly because he believed it would allow him to play his best hockey. https://t.co/v78SmOMQtu pic.twitter.com/2jcF3SRdIQ

Prokop shares that the first team exec he spoke to about coming out was Operations/General Manager Brian Poile.

“He, in that moment, showed me a lot of support and told me the Predators are behind me 1,000 percent and want what’s best for me and that they’re proud of me during this,” Prokop told ESPN. “I remember getting off that phone call and tears just started coming from my eyes, I was so excited.”

“And in that moment, I thought, this is what it’s going to feel like for the rest of my life. For them to show that support that they did in that moment, it felt like I can rule the world.”

Prokop’s announcement follows that of Las Vegas Raiders player Carl Nassib, who became the first out active NFL player last month when he shared with the world that he is gay. Prokop told ESPN that, while Nassib’s recent news didn’t prompt his own coming out, he did find the NFL player’s words, and the reaction of the NFL, inspiring.

The Predators’ Twitter account quickly posted messages of support for Prokop as well as the National Hockey League and the official accounts for other teams.

All of SMASHVILLE is behind you, Luke.

“The Nashville Predators organization is proud of Luke for the courage he is displaying in coming out today,” Henry wrote. “And we will support him unequivocally in the days, weeks, and years to come as he continues to develop as a prospect.”

Henry added that, “A long-stated goal in our organization is equality for all, including the LGBTQ community, and it is important that Luke feels comfortable and part of an inclusive environment as he moves forward in his career.”

“Our message as a team [is that] we’re obviously very supportive of him,” Predators team captain Roman Josi told NHL.com. “We just reached out and told him [we’ll help with] whatever he needs and that we’re proud of him. It’s a big step for him and we fully support him.”

Thank you @lukeprokop_6 for sharing your truth.

The hockey community is a better place when everyone can show their authentic selves 🏳️‍🌈 https://t.co/otiFfeBKlm

The New York Rangers are proud of @lukeprokop_6 and admire his remarkable courage. We fully support him and the LGBTQ+ community. #HockeyIsForEveryone https://t.co/wf5xym1x4e