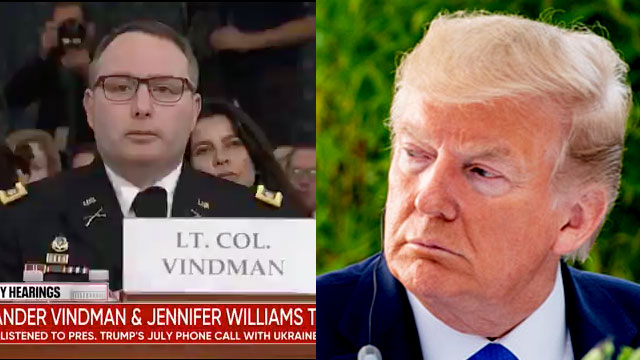 NBC News is reporting Lt. Col. Alexander Vindman, the top Ukraine expert on the National Security Council who testified during the House impeachment inquiry into Donald Trump, was escorted from the White House Friday afternoon.

“LTC Vindman was asked to leave for telling the truth,” his attorney David Pressman said in a statement. “The truth has cost LTC Alexander Vindman his job, his career, and his privacy.”

Pressman added that, “the most powerful man in the world – buoyed by the silent, the pliable, and the complicit” had “decided to exact revenge” on Vindman.

Vindman had, as part of his duties, listened in on the July 25 call between Trump and Ukrainian President Volodomyr Zelenskiy, which was at the heart of the impeachment inquiry.

The Washington Post first reported on efforts by the White House to push out Vindman, citing two people familiar with the move, as part of a broader targeting by Trump of perceived enemies in the wake of his acquittal in the Senate after a two-week trial. The Post reported that Vindman would be reassigned to a job at the Defense Department.

Other than to embarrass him, there was no reason to “escort” a decorated Army officer honored with a Purple Heart medal after being injured in Iraq in 2004.

In his opening statement during his appearance before Congress, Vindman included an emotional message to his father.

“You made the right decision 40 years ago to leave the Soviet Union and come here to the United States of America in search of a better life for our family,” said Vindman. “Do not worry, I will be fine for telling the truth.”

This is appalling. Lt. Col. Vindman, a Purple Heart recipient, has honorably served our country and is a true hero. @realDonaldTrump will do anything to hide the truth and retaliate against truth-tellers, which should alarm all Americans. #VindmanisaPatriot https://t.co/Qqehs1yhWL

This is reprehensible. There was no need to humiliate Vindman this way, nor was it appropriate to retaliate against him for testifying before Congress. Where is @ChuckGrassley, who in 2018 released a video assuring feds they wouldn't face retaliation for testifying to congress? https://t.co/DvyhYwoyF8