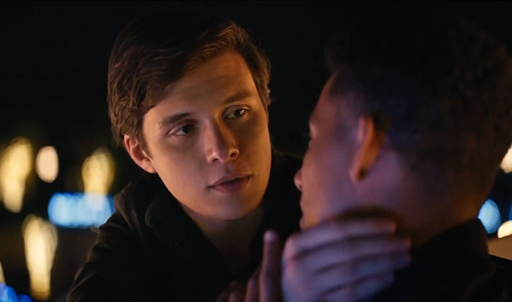 It looks like the MTV Movie Awards loved the romantic coming-out/coming-of-age film Love, Simon as much as we did.

At last night’s awards, the film’s two lead actors, Nick Robinson and Keiynan Lonsdale, took home the trophy for “Best Kiss” for their yes-yes-yes lip-lock at the end of the movie.

Robinson wasn’t available for the ceremony as he’s shooting a new project, but Lonsdale (who came out as bisexual last year) took the stage to accept the award saying:

Love, Simon was the first mainstream film featuring a gay lead character to be backed by a major studio. Released in March, the film was met with strong reviews and box office. To date, the film has grossed almost $60 million on a budget of $17 million.

This is the second year in a row the MTV Movie Awards have honored a same-sex kiss with last year’s nod going to the Oscar winning Moonlight’s beachside kiss between actors Ashton Sanders and Jharrel Jerome.

Boy Culture points out the long history of same-sex kissed in the category with same-sex wins by Cruel Intentions in 2000, American Pie 2 in 2002, Starsky & Hutch in 2004, Brokeback Mountain in 2006, Talladega Nights: The Ballad of Ricky Bobby in 2007, and Moonlight in 2017.